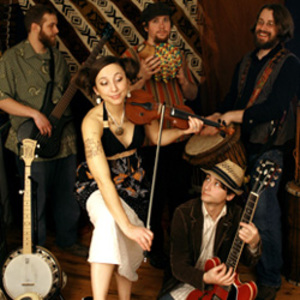 The Ragbirds began with a love for world music and a desire to weave these distant sounds into more familiar genres. Led by Erin Zindle (songwriter, violinist/multi-instrumentalist and vocalist) together with her husband, percussionist Randall Moore, they have created a sound that is hard to define. They call it ?infectious global groove?. The Ann Arbor, MI couple actually started recording The Ragbirds debut CD, Yes Nearby before the band was formed. They searched for musicians who shared the vision of creating honest, creative global music with pop appeal.

The Ann Arbor, MI couple actually started recording The Ragbirds debut CD, Yes Nearby before the band was formed. They searched for musicians who shared the vision of creating honest, creative global music with pop appeal. As the songs unfolded they were laced with ethnic scales and infectious beats from Africa, South America and the Middle-East, all stirred together with a Celtic fiddler's bow. Zindle is a gypsy at heart, with the wisdom of a well-traveled woman spilling into her poetic lyrics.

Since the formation of the band in 2004 there have been a few lineup changes, but with the addition of guitarist/vocalist T.J. Zindle, bassist Dan Hildebrandt, and percussionist Tim Dziekan, The Ragbirds have fully realized their unique sound.

Yes Nearby was released in April 2005, an independent full-length album consisting of 12 well-crafted songs. The CD won rave reviews from local and regional press and found its way into regular rotation on Michigan radio. In June 2007 The Ragbirds released their second studio effort, Wanderlove, which has been receiving enthusiastic reviews from numerous media outlets and selling briskly nationwide. Wanderlove was released in Japan by Buffalo Records in February of 2009.

The Ragbirds use many traditional folk instruments including violin, mandolin, banjo, accordion, acoustic and electric guitars, and harmonica. But the music goes beyond folk with its strong rhythm foundation of bass, drumset, congas and layers of percussion. The effect is positive, creative music with the power of dance-able rhythm and melodies that won't leave you when the show is over.

Zindle is downright exhuberant on stage, grinning like the songs are tickling her the whole time. Her energy is contagious, pouring out onto the audience and putting them under her dancing spell. The most remarkable thing about The Ragbirds music is the diversity of their fans. Hippies and hipsters, old-folkies, teens and children of all ages have found something common here. Their music travels well from a folk listening room to a rock club.

The Threshold & The Hearth