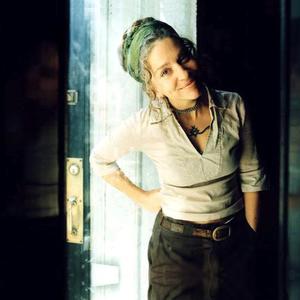 Angela Maria "Ani" DiFranco was born on September 23rd, 1970 from parents with Italian and Canadian backgrounds. Both her father, Dante, and her mother, Elisabeth, were architects. She grew up in Buffalo, N.Y. and played her first gigs at the age of nine, playing in local bars in her hometown. She attended the Buffalo Academy for Visual and Performing Arts. She moved to New York City at 16 and in 1988 she made a demo which has become a highly sought-after fan item. She is now a prolific artist.

Ani's lyrics focus, amongst other topics, on war, GLBT issues, sexual assault, the music industry and, recently, the joy of motherhood.
Early on, DiFranco saw how some talents were ignored while others were hyped up. Based on experiences in meeting with the industry she decided to stay independent and as a result she formed her own label: Righteous Babe Records(RBR among her followers). The label was formed in 1989, and a year later her self-titled debut hit the streets. From day one her popularity grew on a mouth to mouth basis. In 1991 her next relase "Not So Soft" came out, followed by yearly releases thereafter, with the exception of 2000, when she released only an EP called "Swing Set". This EP Includes a cover of Bob Dylan's "Hurricane".

Ani tours both with a band and as a solo artist. Her touring pace has often been extreme and in 2005-2006 she had to take a break from touring due to tendonitis. DiFranco's father died early in the summer of 2005; however, she continued her summer tour as a tribute to him. Ani received a Woman of Courage award at the 2006 NOW conference where she also announced that she was pregnant. On January 20th 2007, her daughter Petah Lucia DiFranco Napolitano was born. Ani Difranco gave birth in her home in Buffalo.

DiFranco has been toasted by the Buffalo News as the "Buffalo's leading lady of rock music." The News further said: "Through the Righteous Babe Foundation, DiFranco has backed various grassroots cultural and political organizations, supporting causes ranging from abortion rights to gay visibility."

Since 2003, Ani has been nominated four consecutive times for "Best Recording package" at the Grammy awards, one of which she won, in 2003 for "Evolve."

DiFranco's guitar playing is often characterized by a signature staccato style, rapid fingerpicking and use of a plethora of alternate tunings. She delivers many of her lines in a speaking style notable for its rhythmic variation. Her lyrics, which often include alliteration, metaphor, word play and a more or less gentle irony, have also received praise for their sophistication. The song "Talkin' Mrs. DiFranco Blues," by Dan Bern, strings together some of the most memorable lines from DiFranco's early career for comic effects.

Although DiFranco's music has been classified as both folk rock and alternative rock, she has reached across genres since her earliest albums. DiFranco has collaborated with a wide range of artists including pop musician Prince, folk musician Utah Phillips, funk and soul jazz musician Maceo Parker and rapper Corey Parker. She has used a variety of instruments and styles: brass instrumentation was prevalent in 1998's Little Plastic Castle, strings on the 1997 live album Living in Clip and 2004's Knuckle Down, and electronics and synths in 1999's To the Teeth and DiFranco's latest studio recording, Reprieve.

DiFranco herself noted that "folk music is not an acoustic guitar--that's not where the heart of it is. I use the word 'folk' in reference to punk music and rap music. It's an attitude, it's an awareness of one's heritage, and it's a community. It's subcorporate music that gives voice to different communities and their struggle against authority."

The combination of personal and political is partially responsible for DiFranco's early popularity among politically active college students, some of whom set up fan pages on the web to document DiFranco's career as early as 1994. Because DiFranco's rapid rise in popularity in the mid-1990s was fueled mostly by personal contact through her many live shows and as said above the word was spread from a fan to their friends and so on rather than mainstream press, fans often expressed a feeling of community with each other.

DiFranco has expressed political views outside of her music. During the 2000 U.S. presidential election, she encouraged voting for Ralph Nader in non-battleground states. She supported Dennis Kucinich in the 2004 Democratic primaries.

DiFranco has occasionally joined with Prince in discussing publicly the problems associated with major record companies. DiFranco is openly proud of her label, which employs a number of people in her hometown of Buffalo. In a 1997 open letter to Ms. magazine she expressed displeasure that what she considers a way to ensure her own artistic freedom was seen by others solely in terms of its financial success. Her label has set a standard for other young female singer/song writers.This has not just made her an icon for independent music, but it has also helped establish her as a true feminist which also see the importance of feminism among men. In her poem Reprieve she states that "feminism ain?t about equality, it?s about reprieve".

DiFranco performed with Cyndi Lauper on "Sisters of Avalon", a track from Lauper's 2005 collection The Body Acoustic. She also performed with fellow folk singer Dar Williams on "Comfortably Numb", a Pink Floyd cover song from Williams' 2005 album, My Better Self.

Her most recent work Canon is a career retrospective that gives the listener access to all of her albums through a careful handpicked selection which includes recorded versions of classics such as "Shameless", "Both Hands" and "Overlap" were 3 of the new recorded song versons on Canon. Difranco re-recorded the songs together with Allison Miller on drums and Todd Sickafose on bass.

Together with Canon, she relased a poetry book with her own painting called "Verses."

Her latest album is called "Red Letter Year," released in late 2008. Just prior to its release, Difranco said the following about the CD: "I'm really excited. I have a new band I'm working with, and they're all over it. Actually, there are a lot of people. I have more guests and friends and other artists involved this time around than I have in a long time. It's fuckin' sprawling, this record. I've been working on it for a while now, taking a little bit more time because I'm on baby time now. My pace is a little bit slower, which I think is great in terms of making records. I think it will benefit the end result"

So Much Shouting, So Much Laughter
2002

where have all the flowers gone: the songs of pete seeger
1998

Which Side Are You On?