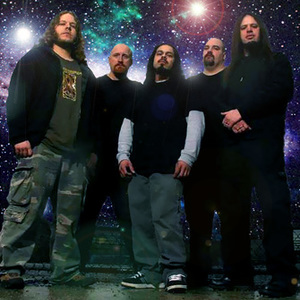 There are multiple artists with this name: 1) Origin is an American technical brutal death metal band from Topeka, Kansas/ They formed in 1998 by Guitarist/Vocalists Paul Ryan and Jeremy Turner. They were soon joined by Clint Appelhanz (Bass), Mark Manning (Vocals) and George Fluke (Drums). On July 4th, 1997, Paul Ryan and Jeremy Turner, acquaintances through mutual friends, had a conversation that would change their lives.

1) Origin is an American technical brutal death metal band from Topeka, Kansas/ They formed in 1998 by Guitarist/Vocalists Paul Ryan and Jeremy Turner. They were soon joined by Clint Appelhanz (Bass), Mark Manning (Vocals) and George Fluke (Drums).
On July 4th, 1997, Paul Ryan and Jeremy Turner, acquaintances through mutual friends, had a conversation that would change their lives. Shortly thereafter, the two guitarists/vocalists got together and started jamming with the intent to create a band embodying blistering speed, total brutality, technical proficiency, and the utmost in quality musicianship.

In October, 1997, they convinced long-time friend Clint Appelhanz to put down his guitar, pick up a bass and join them. Coincidentally, Paul was also good friends with vocalist Mark Manning, who possessed an unbelievably monstrous voice of unmatched ferocity. After hearing the damage the existing members had rendered, Mark aligned himself with the nascent group.

In January, 1998, the quartet found drummer George Fluke, who enabled the artists to push the boundaries of their music even further. Finally, after deciding on a moniker that best represented their vision, the unearthly entity known as ORIGIN was created. Four months after formation, ORIGIN landed a high-profile gig opening for SUFFOCATION, and unleashed on the unsuspecting crowd a torrent of unbelievably technical, pulverizing death metal. The band then entered the studio and recorded a four-song, self-financed and self-distributed demo entitled "A Coming Into Existence," which received rave reviews. During the summer Origin played a couple more shows with bands WORMWOOD, DISASSOCIATE, DOWN BY ANGER & THE HEAVILY CREATED.

In October, 1998, Origin secured an opening slot on the Death Across America Tour which included NILE, CRYPTOPSY, OPPRESSOR and GORGUTS. In February, 1999, drummer John Longstreth (ex-ANGEL CORPSE) joined ORIGIN, replacing George Fluke, furthering the thunderous ORIGIN assault. Longstreth also brought with him bassist Doug Williams, previously of CEPHALIC CARNAGE, who would also join ORIGIN, replacing Clint Appelhanz. The revamped lineup immediately began writing new material and injecting more life and vigor into the old material, while playing many shows in Kansas, Missouri, Colorado, New Mexico, Nebraska, South Dakota, Iowa and Arkansas. After obtaining the "A Coming Into Existence" demo, Relapse Records quickly welcomed ORIGIN to its family. Referencing everything from ATHIEST to SUFFOCATION, ORIGIN can only be described as a relentless musical war. Exploding forth with the intensity of a second Big Bang, ORIGIN launch cranium-collapsing projectiles of extremely fierce deathgrind, merging technicality with utter brutality.

A devastating live set at the 1999 November To Dismember (Tx.) hinted at the contents of ORIGINs self-titled debut. Their debut delivered a punishing concussion, fusing merciless staccato guitar riffing with a homicidal vocal triumvirate and a rapid-fire percussive attack that shatters the space-time continuum. Menacing tracks such as "Lethal Manipulation (The Bonecrusher Chronicles)," "Vomit You Out," "Mental Torment" and "Inner Reflections" were but a few examples of ORIGIN's extremity.

ORIGIN performed at all the major 2000 U.S. festivals including the Milwaukee Metalfest, March Metal Meltdown (Nj.), November To Dismember (Ca.) and the Midwest Metalfest (Kc.), allowing many newcomers to witness the phenomenon. The buzz on the band quickly grew as word of their uncompromising live performances spread rapidly. ORIGIN was invited to take part in Contaminated 2000 (EXHUMED & CEPHALIC CARNAGE) and the high profile Death Across America 2000 Tour - joining forces with Poland's VADER and labelmates CEPHALIC CARNAGE and DYING FETUS - further annihilating the metal masses. Soon after, ORIGIN embarked on yet another tour, this time alongside mathcore titans CANDIRIA, Canada's CRYPTOPSY and hardcore upstarts POISON THE WELL. Other tours included acts with SKINLESS, IMPALED & VADER plus a headlining tour of their own before beginning work on the next CD. Merciless, enormous and all-encompassing,

ORIGIN delivered a sonic barrage of inhuman proportions with their next album. Introducing two new members James Lee on vocals (ILL-OMEN) & Mike Flores (ONCE LIVING) on bass, the mind-eroding "Informis Infinitas Inhumanitas." was faster, darker, and more complex than anything the death genre has issued to date. "Informis Infinitas Inhumanitas" showcased ORIGIN's otherworldly musicianship while delivering heinous amounts of the band's unique "aggro-tech" extremity. Immediately following the release of "Informis Infinitas Inhumanitas," ORIGIN hit the road as part of the largest metal tour of the summer; with NILE, ARCH ENEMY and HATE ETERNAL. Following the tour Jeremy Turner resigned from the band and Clint Appelhanz returned to do a tour with IMMOLATION, VADER & the BERZERKER followed by another tour with ALL THAT REMAINS, SCAR CULTURE, and CREMATORIUM. Unforeseen problems forced ORIGIN to cancel the tour with NUCLEAR ASSAULT in January 2003 and shortly thereafter John Longstreth resigned from the band. The search was on for a new drummer and luckily enough James King (UNMERCIFUL) was the man to fill the spot.

The band played its first show with the new lineup in September 2003 in Topeka Ks., where the ORIGIN ?Portal? video was filmed courtesy of Ryan Caddell and OPTIKULT films. The band then proceeded with a headlining tour in January 2004 with UPHILL BATTLE up and down the West Coast. Summer 2004 saw ORIGIN touring throughout the Midwest, hitting the Milwaukee Metalfest 2004 and The Texas Death & Grindfest with labelmates SOILENT GREEN and KILL THE CLIENT.

In 2005, ORIGIN returned with the absolutely mind-confounding album "Echoes of Decimation?, which immediately stunned the metal community and catapulted ORIGIN back amongst extreme music's elite acts. Numerous U.S. tours immediately followed including headlining featured performances at the New England Metal and Hardcore Festival and Ohio Deathfest. The band then joined forces for a summer North American tour with MALEVOLENT CREATION and ANIMOSITY blowing the doors off of every venue along the tour trail. The tour for ORIGIN was 52 days long with only 3 shows off due to cancellation. ORIGIN drove through over 30 states, 1 show in Mexico & over 16,000 miles were put on the odometer.

In Spring 2006, James King and Clint Appelhanz left ORIGIN. John Longstreth rejoined to fill the drummer position and the band headed out on a headlining North American tour during the Summer of '06.

In early 2007, ORIGIN embarked on their first ever European tour with labelmates MISERY INDEX and NECROPHAGIST. The band was met with overwhelming praise from new- and old-fans alike as well as press who were all seeing the band's destructive live set for the first time.

In June 2007, Jeremy Turner rejoined ORIGIN, thus re-forming the ?Informis Infinitas Inhumanitas? line-up, which is widely considered to be the band's strongest line-up. The band began writing and recording for a new full-length for the remainder of 2007. The resulting brand new album, ?Antithesis?, was engineered by Rob Rebeck at Chapman Studios and mastered by Scott Hull at Visceral Sound.

?Antithesis? is marked for an April 2008 release date and explodes out of the box at breakneck speed, with guitars and bass shredding wildly behind a beastly 3-vocal attack, slowing only for the virtuosic soloing of emerging guitar heroes Paul Ryan and Jeremy Turner. Faster, heavier, and decidedly more advanced than anyone could have ever envisioned the genre becoming, ?Antithesis? is a modern day death metal classic, which proves ORIGIN stand head and shoulders above their peers.

ORIGIN will begin the touring cycle in support of ?Antithesis? with a European headlining tour in May along with IMPALED and HOUR PENANCE which will also include a number of European festival appearances. ORIGIN has also been confirmed as one of the headliner's at this year's Central Illinois Metalfest held in July. Much more ORIGIN touring information will be announced soon.

3) Origin is music from the company that made the Ultima series.

Abiogenesis: A Coming Into Existence

A Coming into Existence