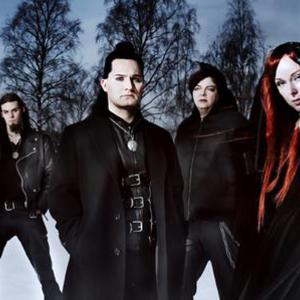 Amberian Dawn is musically lead by keyboardist/guitarist Tuomas Sepp?l?, who exclusively composes all music for AD. Heidi Parviainen[ adds the finishing touch to the songs with her lyrics.

All members of the band have some form of extended history with music and have played in many different bands. Tuomas Sepp&auml;l&auml;, Heikki Saari(drums), Peter James Goodman (vocals), and Tommi Kuri played in a band called Virtuocity. As Virtuocity disbanded, they started working on songs composed by Tuomas. He started playing guitar, which he mastered as well as playing keyboards. Sampo Sepp?l? (guitars) and Tom Sagar (keyboards) joined to establish Atheme One.

It was in the summer of 2006 that Tuomas and Tommi decided to start looking for a female classical singer. Tuomas had composed dozens of songs that were not suitable for the voice of Atheme One's vocalist, Peter James Goodman. They didn't want to waste the songs, so they began searching for suitable singer.

After a few weeks search, almost at the same time, they found the same advertisement - a classical soprano singer Heidi Parviainen (from the band Iconofear). They listened to her sample and decided to organize a demo session. They were pleased with the demo and thought that Heidi would be a perfect match and they liked the fact that Heidi can write lyrics too.

Their first studio session was in fall 2006 in which they recorded two songs (River of Tuoni and Evil Inside Me) at the Rockstar Productions studio in Hyvink??, Finland. Soon after, Heikki Saari moved to a band called Norther, being replaced by Joonas Pyk&auml;l&auml;-Aho (from the band Thaurorod and Lathspell).

After a while Sampo Sepp?l? decided to leave the band due to personal reasons. On August 1, 2007 the band introduced Kasperi Heikkinen (previously in Guardians Of Mankind, Merging Flare, and Iconofear) as the new guitarist.

Amberian Dawn signed a record deal with Finnish label KHY Suomen Musiikki. Their debut album, River of Tuoni, was released in Finland on January 30, 2008 and hit the charts right after release in Finland.

In the summer and Autumn of 2008, they were the main support for Epica's European tour. In late 2008, they recorded their second album The Clouds of Northland Thunder which was released in June of 2009.
Third album End of Eden was released in October 2010 on Spinefarm Records

The upcoming fourth album Circus Black will be released in February 2012.

The Clouds Of Northland Thunder