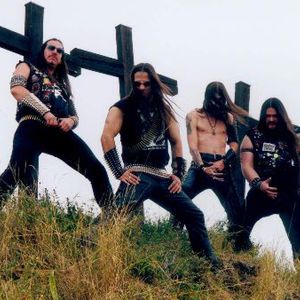 Desaster was sprung in 1988. They are a (blackened) thrash metal band from Koblenz. Important musical influences include "Venom", "Hellhammer", "Mot?rhead" as well as the early "Sodom" sound. 1993 appeared the first official demo with the title "The Fog OF Avalon". The first album, "A Touch Of Medieval Darkness", appeared in 1996. Further albums followed, whereby the sound developed towards blackened thrash metal. The last albums were published over Metal Blade records. Line Up:

The Oath Of An Iron Ritual

Tyrants Of The Netherworld

Ride On For Revenge