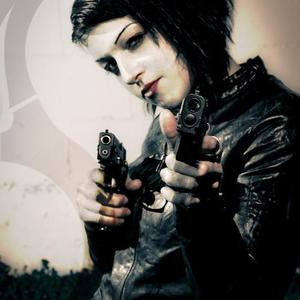 Unter Null is an electronic music project formed by Erica Dunham in 1998 in Seattle, WA, now currently based in Hamburg, Germany. The official website is http://www.unter-null.net. Years of classical music training, a love for computers and technology, a tough-as-nails resolve, a fierce independent streak, and the compulsion to find catharsis through music led Erica to eventually form Unter Null at the age of 17. Unter Null has been and will always be Erica Dunham in the studio.

Years of classical music training, a love for computers and technology, a tough-as-nails resolve, a fierce independent streak, and the compulsion to find catharsis through music led Erica to eventually form Unter Null at the age of 17. Unter Null has been and will always be Erica Dunham in the studio.
A first album was self-released only as Unter Null and it's there where Unter Null started to gain a cult following.

Prior to The Failure Epiphany, the album that placed Unter Null on map, she spent time collaborating with several other musicians and noise-makers, including Leech from NTT/Annihilvs, with whom she released a collaborative album Navicon Torture Technologies Fucks The Shit Out Of Unter Null, a decidedly noisy and abrasive album. Soon after that, Erica released Neocide on Annihilvs, where her powernoise roots were still heard prominently.

During these early times when Unter Null was just starting to blossom, Erica was an active and prominent figure in the industrial community in Seattle, where she worked with Karloz (MANUFACTURA) on "Kontrol+Alt+Delete Productions", bringing some of the first industrial and noise bands into the city. She also began DJing at several club nights, helped run and organize events focusing on industrial music, and joined the Seattle-based band Noxious Emotion as a live drummer.

Still making Unter Null her primary focus, she met up with Shaun Frandsen (GLIS), and her first remix as Unter Null was placed on his album Disappear! released in 2004 on Alfa Matrix. Alfa Matrix contacted Erica about doing an album as Unter Null on the label, and thus the birth of the massive club hit Sick Fuck was born.

The Sick Fuck EP was released in 2005, and was the prelude to the full-length album The Failure Epiphany which was received with much critical acclaim and international club play later on that year, and this propelled Unter Null from the murky waters of powernoise and straight into the EBM arena. While retaining some of her earlier defining powernoise sound, Erica wanted to incorporate more melody and structure to her writing, and The Failure Epiphany grew to become a prime example of the marriage of caustic noise and strong melodic arrangement.

Soon after The Failure Epiphany was released, Unter Null began performing live shows; first in Seattle, which soon led to shows in Belgium and Holland. Exhilarated by the experience, Erica began to work fervently on the next Unter Null release, which became the infamous Sacrament and Absolution EPs, which Alfa Matrix playfully pitched as being "twins", as the two albums became one with the paired artwork.

After the "twin EPs" were released, Unter Null relocated over to Europe in what turned out to be an extensive and drawn-out tour, starting in Vienna, and taking Unter Null globe-trotting to many places: Italy, Russia, Germany, France, Greece, Denmark, Sweden, England, Scotland, Spain, and more. Several of the shows were played with Aesthetic Perfection, and there were several festivals. Marco Visconti (XP8) joined the live line-up for brief period, which also brought the two bands to do a brief Russia tour. During the course of the 2 years that Unter Null made Europe her home-base, Erica started work on a project which was to become Stray.

In 2008, after returning to the States, Stray become an entity of its own, letting Erica explore other sounds and the evolution of her production skills. Stray gave Erica the ability to showcase her aptitude for less-aggressive and more accessible songwriting, with layered melodies and lyrics reflecting a softer and warm side of her. The tendency to say "Unter Null is ying, Stray is the yang" rings true.

The debut of the first Stray album, Abuse By Proxy was released in 2008, again on Alfa Matrix, and received a much quieter applause, as Unter Null was still the domineering project. Critics called the album "cold", "emotional" and was well-received by critics across the board. Of course, Erica wasn't one to sit still, and she then began production on the next Unter Null album.

Moving On was released in the winter of 2010, despite some hiccups along the way. In 2008, Christmas night, Erica's house caught fire, which resulted in the loss of her entire music studio, as well as what was thought at the time to be the entirety the new Unter Null album. Fortunately, she was able to retrieve the data from the hard drives, and Moving On became a record that has surely so far been the highlight of Unter Null's discography. The album received wonderful reviews, and some confused feedback from Unter Null fans, as it was a certain departure from The Failure Epiphany. The album featured much cleaner music production while still retaining Erica's signature harsh vocals, and has been a defining album in the evolution of Unter Null.

In 2009, Chris Norris joined as a permanent live drummer as Unter Null, and while playing frequently in Portland venues, they decided to book a US tour.
The "Detox Tour" as it was called, took months of routing and planning, and it finally became a reality for the duo in the summer of 2010, and it took Unter Null across the United States and was incredibly successful, despite the support band leaving 3 shows into the tour. As Erica has always been one to persevere, the tour pushed on and ended well after traveling hundreds of miles, a few 24-hour drives, and the loss of a stuffed penguin.

Time slowed down at this time, as Erica took on more projects that consumed her time away from music. However, again not laying dormant, she wrote and released the sophomore Stray album Letting Go in 2012, a vast departure from Stray's Abuse By Proxy. The majority of the critiques rated it outstanding, yet some regarded the album in its entirety as melancholy. Melancholy being correct, as Stray was never meant to be an uplifting project of Erica's; it is admittedly a response to the fire that dies down, the anger that wears off, and the gloomy cloud that hangs around far after the storm.

In the spring of 2012, Erica and Chris relocated to Hamburg, Germany, where at the time of writing, Erica is currently on production of the next Unter Null album.