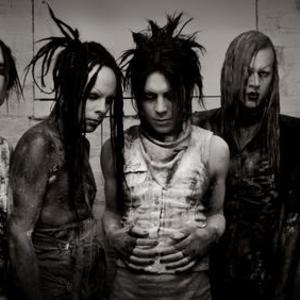 Psyclon Nine is a musical group formed in 2000 in the San Francisco Bay Area (CA), led by vocalist Marshall Goppert, under the stage name Nero Bellum. While their early efforts are generally categorized as aggrotech, their more recent material has incorporated a disparate set of musical and aesthetic influences, notably industrial metal. They belong to the so-called "second wave" of American harsh ebm / industrial electro, along with bands such as Stromkern, Die Sektor, and Tactical Sekt.

The group took a break at the end of 2010 due to Bellum's opiate addiction, but returned to stage in late October 2011 at gig in New York.

The name is a malapropism of Zyklon B, the trade name of hydrogen cyanide as used in the gas chambers during the holocaust. The "Nine" is used because the number is significant in Aleister Crowley's numerological writings.

Versions Icon Of The Adversary Remixed

Icon Of The Adversary

Use Once And Destroy: Alterations, Abstractions & Aberrations (Psalms And Hymns Of Perversion) (CDS)

Order Of The Shadow : Act I