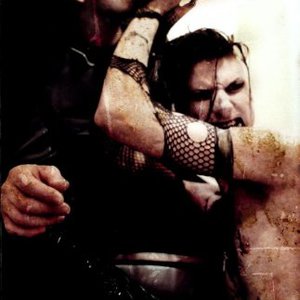 Being involved in various brutal and violent black metal / electro metal bands (MANDRAGOR, LUCKY STRIKER 201, etc.) or having toured as live members of PUNISH YOURSELF, Benoit Sixteen and Sylvicious decided once upon a day in the year 2003 to explore the vast world of computer-generated music ? an exciting new means for them to express their inner rage. TAMTRUM was born. Since then, the population of the once peaceful village of Aix-en-Provence in the south of France lives in fear and panic.

The bloodthirsty animals of TAMTRUM continue to grow and feed on provocation, perversion and sonic mutilations. They progress faster than a virus and have spread their infectious harsh elektro tunes all over the country. One year later, their debut album ?Some Atomik Songz? was released and TAMTRUM's noise could no longer be stopped and invaded the entire European continent.

TAMTRUM is perpetually on the road for an unholy quest to summon more victims. Their ultra-powerful frantic live performances receive the unanimity of outstanding votes: TAMTRUM are above all a live band! And the use of fire-blowing, strip-tease shows and other fluo-chemical performances on stage reinforce their forceful, uncompromising and decadent image.

Before setting off to play some major European festivals, TAMTRUM still managed the time to release the ?Versus? split-album with the other French band LOK-8.

In 2005, the duo was joined by old colleague Fixhead, and the TAMTRUM monster was once again locked in the studio to work on a new album. The band also made some eye-catching blitzkrieg appearances on several compilations that propelled TAMTRUM onto the playlists of every club across the world with their mega-hit ?Le Son De La Pluie?.

With a punk spirit, a ?sex, drugs'n industrial? attitude, a dark goth/metal look, harsh elektro sequences, distorted screams and locomotive drum patterns TAMTRUM is here to shake your ass! Described by many as the most promising and fastest rising French underground talent of the moment, TAMTRUM often gets compared music-wise to a band like HOCICO with a rather MANSONesque attitude? Their music and lyrics (in French & English) are morbid, disturbing, nasty, sick, noisy and per definition hyper-danceable.

Their next hi-energy and merciless aggressive assault is planned for release in the spring of 2006 on the band's new label Alfa Matrix, before the band starts another fucking bloody and shocking tour on speed across Europe? Keep the fainthearted kids secluded at home ? heads will fall and clubs will burn, burn, burn!