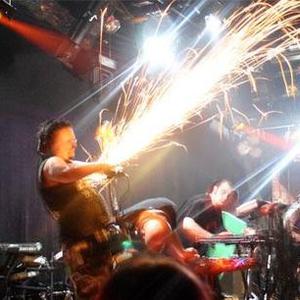 TERRORFAKT is an industrial/Power Noise musical project from New York City. They are currently signed to Metropolis Records. Although the project involved multiple members in its early days, it is now the de facto solo project of DJ HELLRAVER (who also works under the names HELLRAVER, and T-Faktor). Having had produced earlier albums, in 2003 they debuted on Tinman Records with Deconstruction. Prior to the Tinman Records release, a different version of Deconstruction was released on CD-R independently.

In 2004 TERRORFAKT signed to Metropolis Records and released ?Cold Steel World? and it's follow up remix album ?Cold World Remixes?. In 2006 ?Teethgrinder? was released on Metropolis Records, followed by 2009's ?Re/Evolution? which featured re-mastered versions of select tracks off of ?Deconstruction? (now out of print and hard to find), ?Reconstruction? (also out of print) and some new and unreleased tracks.

The Fine Art Of Killing Yourself CD2

The Fine Art Of Killing Yourself CD1