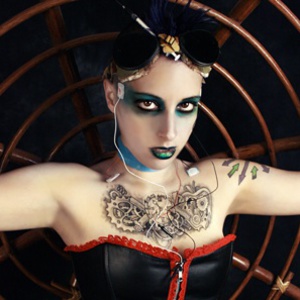 Experiment Haywire started out in late 2004 as an attempt to rebel against her Jewish heritage in which she was forced to take piano lessons. As an avid listener and DJ of electronic, punk, industrial, and noise music (Deconstructed, QXT's Diva Weekend, Abstraction, etc.) it was only a matter of time before Rachel gave birth to her own musical explosion. Experiment Haywire would express themes of political dissent, female empowerment, war, (internal and external) torture, insanity...

Influenced by artists ranging from Einst?rzende Neubauten, The Plasmatics, Atari Teenage Riot and S.I.N.A. Rachel decided to form an all female performance art troupe in New York City called Nuclear Riot Party. She began playing at well known venues such as the Knitting Factory and the Continental and quickly gained a devoted cult following among the local (de)population.

Fed up with the herd mentality of the Nuclear Riot Party, Rachel soon decided to get back to Experiment Haywire. While Haywire was originally an avant-garde noise project based on desolate field recordings at weird hours of the morning it soon turned into a rhythmic industrial invasion that incorporated these elements into the harsh and abrasive sound of an electronic punk assault.

The first Experiment Haywire single, "Army or Two," was released on a 3 CD compilation entitled Women Take Back the Noise. (also featuring Cosi Fanni Tutti, VyL8, and Dark Muse). In 2006 she performed at Digital Hardcore Fest in Toronto with Phallus Uber Alles. Simultaneously, World War 23, her first collection of songs was distributed in limited release and received favorable reviews.

Soon Rachel was playing for wider audiences in bigger cities (aside from New York) such as San Francisco, Washington DC, Miami, Denver, Seattle, and Portland along acts such as Android Lust, Informatik, Cesium 137, God Module, Alter Der Ruine, Babyland, Pill Brigade, and Z'EV. She even got herself on the same bill as Boyd Rice for political infiltration.

In early 2007 Experiment Haywire began working with engineer Xris Flam of Mindswerve Studios, NYC. Having worked with a variety of artists such as KMFDM, Mindless Self Indulgence, DJ Spooky, Merzbow and Public Enemy he helped mix her infamous anti-nazi EP known as Cooler Than Genocide and her full length album Annihilation Chic.

In late 2009 Rachel quit working with Xris Flam after years of training as a producer. She currently produces other musicians as she simultaneously works on Experiment Haywire. Look out for her new album Grrl Interrupted which will be released in mid-2010 on her very own machineKUNT.

Rachel is also a published author who is featured in the Disinformation anthology Generation Hex. Her first full length book is called Acidexia which is an authentic, highly personal coming of age autobiography and a cultural artifact documenting the fringes of culture at the dawn of the Information Age.