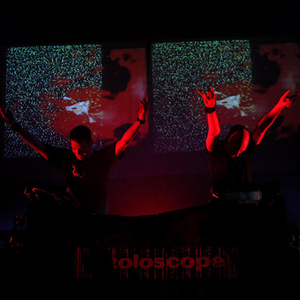 Iszoloscope is an industrial band from Aylmer, Quebec, Canada, currently based in Montreal, formed in 1999 by CHUO 89.1 FM (the University of Ottawa's radio station) DJs Yann Faussurier and Fran?ois B?nard, creating heavily processed ambience and bristling noisy beats. Iszoloscope pushes the abstract conceptualization of isolation and its induced altered states of consciousness into a powerful, ominous, and immersive dark sonic aesthetic that can be called its very own, creating a seamless fusion of industrial, electro-acoustic, ambient, rhythmic noise, psy-trance and break-core.

Yann Faussurier underwent a lot of introspection before arriving at the sinister, squalling noise he now produces, dismissive of any mainstream music ("it always has been a real joke to me"), and finding his place on the vast musical continuum through immersive videogames and multi media which combine moody action and eerie soundtracks. After becoming acquainted with the menacing atmospherics of artists like The Future Sound of London, Coil, Deutsch Nepal, Numb, Morgenstern, Goblin, Yuzo Koshiro, Converter, Ah Cama-Sotz, Xorcist, Haujobb, DJ Producer, Gridlock, Merzbow, Black Lung and Scorn, Faussurier began DJing at CHUO with friend Fran?ois B?nard. The two started composing original music together in 1999.

After gathering field-recorded samples, Faussurier manipulates them with all sorts of effects with no preconceived ideas of the result. The processed samples end up sounding nothing like the source material, which is what makes albums like Aquif&egrave;re (Ant-Zen, 2002) and Au Seuil Du N&eacute;ant (Ant-Zen, 2003) sound so alien. A lot of electronic music tends to be bold and shimmering; Iszoloscope's sound is more jagged and elusive.

All Is Immensity And Chaos

The Edge Of Certainty