The Peoples Republic of Europe 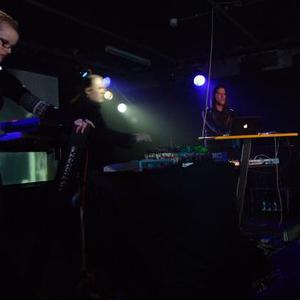 Biography: - Samples/programming/synths - Propaganda/chants/dancing The Peoples Republic of Europe started on the 4th of June 2000, when exploring the posiblities of sound manipulation in Cubase VST 3.5. The first album "Cumulonimbus" was recorded on this day, and the following, and does consist of 6 experimental tracks in a darkambient tradition. One of the songs (Matter antimatter) reached a number one spot in the soundclick.com mp3 list.

The Peoples Republic of Europe started on the 4th of June 2000, when exploring the posiblities of sound manipulation in Cubase VST 3.5. The first album "Cumulonimbus" was recorded on this day, and the following, and does consist of 6 experimental tracks in a darkambient tradition. One of the songs (Matter antimatter) reached a number one spot in the soundclick.com mp3 list.

After this, work started on a second album. Initially named "The united Soviet states of America". 3 songs were created ,but the project was abandoned due to lack of inspiration. However: new inspiration was found in the rhytmic industrial music put out by the German Ant-zen label. The music from The Peoples Republic of Europe shifted from Darkambient to heavy industrialism, and the second album was completed and released under the name: "Thirst".

After this succes, some more liveshows where played, and work started on the fourth album "Among the ruins" This harsch and agressive CD was released in March 2003, and recieved critical acclaim. The track "Axis of evil" made it into a small clubhit, and more performances were played, with the highpoint being the "Xtreactor festival" at Ekko, Utrecht, on which The Peoples Republic of Europe performed on the same bill as imported influences Winterkalte and Asche.

After this, it was back to work on the fifth album "Juche" which promises to be harscher, and also more experimental and diverse, without losing the harsch dancefloor pit slamming. During this time a new live member was introduced. [NOIR] joins the band on primal screams, chants, dancing and propaganda.

A live show was played with [NOIR] at "De Raad (The Council)" in Alkmaar. This show was recorded on some fine equipment, and released as the live album "The siege of Alkmaar". During this period, The Peoples Republic of Europe appeared on two compilations. On "Lowlands Industrialism" and on "Van Duytschen bloet". In February 2004, "Juche" was finally released. Given the quality of this album, and the warm response of the public of its predecessor "Among the ruins", this piece was released as a real CD, and not as a CDr. A new stage in the history of the Peoples Republic of Europe has begun.

Quite fast after the release of "Juche" tPROE started on the next album. Originally planned as an vinyl EP, the recording session progressed further and further, and led to the second CD release "Monopoly of violence". This album focusses mainly on the dancefloor, without doing concessions to the powernoise and darkambient influences of tPROE. This album also marks a bigger role for vocalist [NOIR]. As for live shows, tPROE progressed as a two man outfit, due to logistic problems with live percussion.
"Monopoly of violence" hit the streets hard. The album did get quite some goor reviews from the dutch music press, as well as very good reactions from the industrial scene thougout the world. The title track and "Kraft durch krieg" made it to clubhits in the industrial clubs throughout the world.

In May 2005 the ambient album "Cumulonimbus II [ambient recordings 2003-2005]" was released as an internet release only. This album is ment to show another side of tPROE, and also to link to the early days, when tPROE was an ambient outfit. This does however not mean a change in style. tPROE is already busy with composing a new harsch violent industrial album.