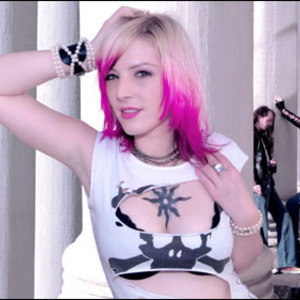 Once upon in time... - The story begins in the middle of the 90's, when Frank Klatt and Stefan B&ouml;hm, who already knew each other from school had gained varied musical experiences. They developed the project PzychoZone, which, among other things, was part of the Hanover Street parade as a live act. But soon it became clear that something was missing, and they started looking for a suitable voice.

1999 - Sina H&uuml;bner (S.I.N.A), who was an accomplished singer that could produce some serious volume was discovered at the beginning of the year. The project was now called Pzychobitch, and the aim was to incorporate, and innovate the electronic music tradition.

2001 - In April Pzychobitch published its first Maxi "Master Of Myself" on the label ProNoize / Dark Dimensions, and in December the album "Eden"
was released.

2002 - In April 2002 the EP "Big Lover" appeared on the market, a track from the previous album, with remixes by some of the scenes biggest names. S.I.T.D. rmx of "Wake up" filling the club floors lasting for weeks, and the EP rose up to place 6 in the German Alternative Charts (DAC).
2002 - In June Frank Klatt decided to leave the band in order to follow his own musical ways. An old friend showed up again, with whom Stefan has been in the band called Cascade Falls in 1992: Martin Kovacic - Pzychobitch now again was complete.

2003 - Pzychobitch worked on new material the whole year through and came up with a DJ-Vinyl: "We are" in collaboration with Digital Punk Boys, released on the label Bodyfunk Records. And also pzychobitch itself changed the label. At the end of the year 2003 they released the EP "The Day Before" on Minuswelt Musikfabrik.

2004 - While Pzychobitch was touring with In Strict Confidence, they released their second album "The Day After". This period has also been successful in the Alternative Charts, even in Belgium it was position #1. In summer, Martin left the band. Sina and Stefan decided to work twosome from now on, and began the work on new material.

2005 - ...but only at the beginning of 2005 they noticed the direction Pzychobitch had to go, and rejected a bigger part of this work, and restarted with new pep the work on the album "Electrolicious" that will be released in April 2006!

The Day After (The Hecq Destruxxion)