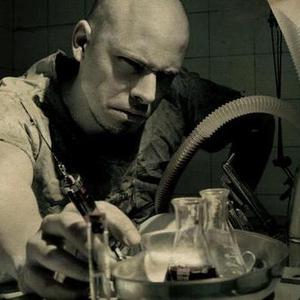 When the history of THE RETROSIC started in April 2001 with the release of PROPHECY, no one could foresee that the first album would already enjoy considerable resonance in the electro scene. To keep full control over his music Cyrus founded his own label TRIBUNE RECORDS, which became RETROSIC's very own platform from its beginning. Followed by MESSA DA REQUIEM hardly a year later, the mini album hits the top of the European Alternative Charts. It is celebrated ?Record of the Year? of the DUTCH ALTERNATIVE CHARTS (DUC) after three months' constantly holding the top position.

Followed by MESSA DA REQUIEM hardly a year later, the mini album hits the top of the European Alternative Charts. It is celebrated ?Record of the Year? of the DUTCH ALTERNATIVE CHARTS (DUC) after three months' constantly holding the top position. The song GROUND ZERO establishes itself as a club hit overnight skilfully linking hard electronics with an oriental theme. For the first time here, THE RETROSIC is enriched by the classical singing of soprano Zaide who gives the EP its name quoting passages from the requiem by Verdi under the same name.

2002 and the following year also sees the band challenging various remix works for Bruderschaft, Clan of Xymox and a collaboration with [:SITD:] feat. Cyrus on vocals for the comic-soundtrack ERYNIS with the song DECOY and on the RETROSIC-Remix for LAUGHING STOCK.

Almost two years after MESSA DA REQUIEM, THE RETROSIC's second full-time release is brought to daylight with GOD OF HELL. Harsh arrangements combined with biting vocals remain the immovable centre of THE RETROSIC, now expanding to a fully band line-up behind Cyrus. But the electronic surrounding is meeting more exceptional instrumentalisation than ever before and resulting into an enormous number of established club hits: In THE STORM's Indian flutes open the album and martial military drums and ethereal boys' choirs rise in the final part of MANEATER. DRAGONFIRE links industrial elements with wide trombones, whereas ELYSIUM apparently leaves the electronical context completely to make room for Oriental rhythms. It is this song, which again features Zaide's singing as its centrepiece.

GOD OF HELL?s chosen to become the most successful electro release 2004 at the German Alternative Charts (DAC) and also RETROSIC's first album released in North America.

After 2 years of work the highly-awaited follower to GOD OF HELL will be released in summer 2006. NIGHTCRAWLER will take you on a trip to the inevitable, your fear of the dark ? where the creatures of the night hide their faces so that you have never noticed them ? until now.