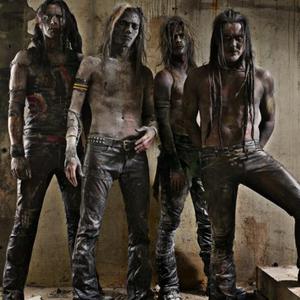 H?vard Ellefsen, often referred to as Mortiis, is the only constant band member. He was born in Skien, Telemark. Mortiis began his musical career playing bass for the black metal act Emperor. He stayed with the band just over 1 year before going on to create his own solo project, though unlike his previous band the music would be dark ambient oriented. Ellefsen was experimenting greatly with music during his early solo career. He started four separate projects, though the focus was always on Mortiis.

Ellefsen wrapped up work on the soundtrack to the movie Broken and The Devil's Chair (Renegade Films) in 2007. Both films were directed by Adam Mason who first worked with him on the Mortiis video for Decadent & Desperate. Having completed an album's worth of songs, Ellefsen commented at how they were "atmospheric and eerie" and also "very dark" while "some of it actually is semi-song structured, with some melody and sense to it." They were done under the Mortiis name. The collected music, will eventually be released as a Mortiis album.

Mortiis as a band was formed shortly after the release of The Smell of Rain.

Demons Are Back (CDS)

The Shining Lamp Of God (CDS)