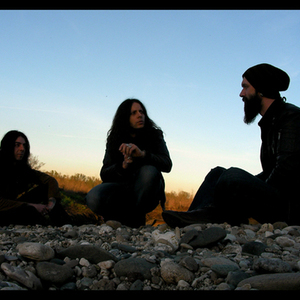 Ufomammut is a power trio formed in 1999 in Tortona, Italy by Urlo (vocals, bass and synths), Poia (guitars and synths) and Vita (drums). Ufomammut is worldwide recognized as the creator of a unique brand of psychedelic sludge. Since the beginning, Ufomammut has always been in search of its own sonic way: developing from a primordial acid album like ?Godlike Snake?, the band focused on a more mature and evil sound with the second album ?Snailking?.

The third album ?Lucifer Songs?, opened new and unexpected doors, being the result of a mature and tight-knit band willing to experiment whilst maintaining its DNA.

The flaming spatial voyage which made ?Snailking? one of the records of the year in 2004 in many specialist magazines and webzines, remained as their core sound, evolving alongside new soundscapes made up of sinister atmospheres and gloomy sounds of vintage electronics. With monolithic and repetitive riffs submerged by a psychedelic and magmatic sound, the following album ?Idolum? brought the band to its highest level.

In 2010 the band created "Eve", their fifth album. "Eve" ? comprised of one 45-minute atmospheric track, divided into five distinct movements ? acts as a living homage to the first woman on Earth, and the rebellion to her creator for bringing knowledge to Mankind. "Eve" is a new step in the sonic adventure of Ufomammut; another level in the band's research. Rounding out at an incredibly action-packed 44:44, the album passes through the same massive atmospheres as "Idolum", layered with mastodonic riffage as heard on the band's "Snailking" release, yet also bears some of the apparition-like passages the band displayed so well on their "Lucifer Songs" LP, while still formulating a forward-thinking approach to the release.

In ten years the band has played several times around Europe reaching the US West Coast in 2009. Ufomammut has performed at international music festivals like Roadburn, Hellfest, Assymetry and has shared the stage with bands such as Down, Baroness, Lento, Motorpsycho, Orange Goblin and many more. Their live show are supported by the internationally acclaimed video and graphic art of Malleus, a rock artists collective who conjure the entirety of Ufomammut's visual impact.

UFOMAMMUT means:
UFO [,ju:ef'ou] - Abbreviation of U(nidentified) F(lying) O(bject)
MAMMUT [?m?mmoot] - Italian for mammoth
The entire word ?UFOMAMMUT? should be pronounced in the Italian way and it sounds something like ?oofomammoot?

Supernaturals Record One (With Lento) (EP)