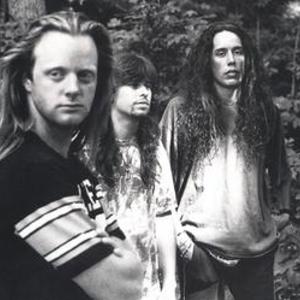 An anomaly for the death 'n' grind-obsessed Earache label, North Carolina's Confessor performed slow and dirgy doom metal, and were formed in 1986 by wailing vocalist Scott Jeffreys, guitarists Brian Shoaf and Ivan Colon, bassist Cary Rowells, and drummer Stephen Shelton. After releasing 3 demos, Confessor released a debut album called Condemned in 91 and an eponymous EP, but lack of interest in their talents soon drove them to break up.

They re-formed a decade later under tragic circumstances to play a benefit for the recently deceased Colon, then while they were together decided to record a 2004 EP entitled Blueprint Soul. New album Unraveled was released in 2005.

----------------------------------------------------------
" CONFESSOR made its mark on the underground metal scene in the late 80's by combining some of the genre's essential elements in a way that no band had attempted yet, and that few, if any have successfully blended since. Once dubbed "the world's most obstinately technical metal band", CONFESSOR never failed to bewilder their fans with ability to follow huge gut-wrenching guitar harmonies and wailing vocals with intricately woven riffs that could not be assigned time signatures. The band stood alone on an island it had created in a sea of redundant, cookie cutter metal bands until putting their instruments down in 1994.

In the years that followed, CONFESSOR was often cited as a principle source of inspiration for bands and individual musicians alike trying to do something unique. Fans of the band have held them in high regard as a seemingly endless stream of one dimensional bands has dumped itself into an unimaginative cesspool of commercially accepted, but soulless metal. With "Nu Metal" now carrying the torch for heavy music, people who have missed some of the heart and groove of their favorite metal bands have had little to cheer about.

CONFESSOR has reformed and is ready to show the metal universe what it has missed for ten long years. Once upon a time the term "heavy" was synonymous with "provocative" and bands labeled as such prided themselves in their ability to challenge listeners' sense of what music should be. The time has come for someone to forsake gothic imagery and all traces of techno and hip-hop for the loftier pursuit of making metal rock again."