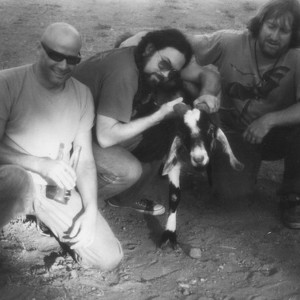 Goatsnake is an American doom metal band from Los Angeles, California. Goatsnake was formed in 1996 from the ashes of The Obsessed. After The Obsessed's demise, the rhythm section consisting of Guy Pinhas (former bassist of the Dutch stonerband Beaver) on bass and Greg Rogers on drums began jamming with guitarist Greg Anderson (Thorr's Hammer, Burning Witch, Sunn O)))). They soon found a vocalist in Pete Stahl (Scream, Wool, Earthlings?, Desert Sessions). Goatsnake recorded and released two 7" EPs in 1998 and were featured on several metal compilations.

They released their debut full-length, 1, in 1999 on Man's Ruin Records/Rise Above Records.

Goatsnake toured the Europe in support of their debut album and played with bands such as Unida, Fatso Jetson, and Electric Wizard. They returned in 2000 for a U.K. tour with Orange Goblin and Sunn O))), another Anderson project.

In 2000 Pinhas left Goatsnake to join Acid King and was replaced by Stuart Dahlquist of Burning Witch. Goatsnake released a split with Burning Witch on Hydra Head Records that same year. They also released the Dog Days EP on Anderson's Southern Lord Records that same year. Later that year they released their second album, Flower of Disease on Man's Ruin Records/Rise Above Records.

Joey Castillo (Eagles of Death Metal, Queens of the Stone Age) replaced Goatsnake's original drummer Greg Rogers after his departure in 2001, but that was short lived. The band split up in 2001 and Anderson continued with Sunn O))) and played in Teeth of Lions Rule the Divine.

In 2004 the band reformed with Anderson and Stahl being joined by bassist Scott Reeder (The Obsessed, Kyuss) and drummer JR (Cave In). They recorded three songs which were released on the Trampled Under Hoof EP along with two previously vinyl-only tracks. This same year also saw the release of the compilation 1 + Dog Days by Southern Lord Records, which combines the first album and the Dog Days EP as well as a track from the Man of Light EP.

In 2010 the band played a headlining set at Roadburn 2010 and continued the reunion tour into 2011 with a string of american and european dates.