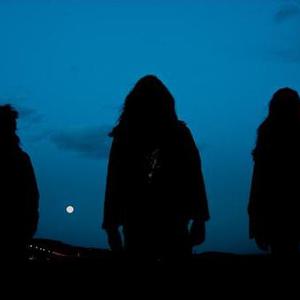 Ramesses is a doom metal band from Dorset, England, featuring ex-members of Electric Wizard. Bristling with malevolence, Ramesses' crushing grooves induce a hypnotick lethargy: weighed down, beleaguered and enveloped by doom. While the percussion/guitar/bass/vokills set to work on your viscera, your head is forcibly plunged down the rabbit hole and drenched in heavy psychedelia. Spawned in the bleak woodland of Dorset, England...

Bristling with malevolence, Ramesses' crushing grooves induce a hypnotick lethargy: weighed down, beleaguered and enveloped by doom. While the percussion/guitar/bass/vokills set to work on your viscera, your head is forcibly plunged down the rabbit hole and drenched in heavy psychedelia.

Spawned in the bleak woodland of Dorset, England, this three-piece has been disfiguring the innards of its army of devoted listeners since 2003 when original Electric Wizard drummer Mark Greening and guitarist Tim Bagshaw hooked up with Adam Richardson (bass + vox), formerly of Lord Of Putrefaction, Spirmyard and Hexed. In the intervening years, Ramesses have ripped an incurable wound in the metal scene.

August 2003: within 24 hours of being holed up at London's Fortress Studios, the band had recorded 4 tracks. Limited demo versions of ?Ramesses II' and ?Master Your Demons' were pressed on CD and vinyl in Europe and the USA. Promo videos were also produced, with the short for ?Ramesses II' getting multiple airplays on MTV Brasil and featuring in the Doomed Nation DVD magazine.

Legendary producer Billy Anderson re-mixed all four tracks for Ramesses' acclaimed debut EP ?We Will Lead You to Glorious Times', released on This Dark Reign Records in January 2005. On the back of this, the band toured, casting a shadow across the UK and Europe and so mustering a legion of dedicated fans through their thunderous stage presence. The severity of their savagery was well documented as they received rave reviews in the major metal press as well as features in Metal Maniacs and Terrorizer. Since their inception, Ramesses have been play-listed on radio stations in over 30 countries including Total Rock, KNAC and Resonance FM.

Halloween 2004: the band entered State of Art studios in Bristol and teamed up with Billy Anderson again to lay down ?The Tomb' EP, which was released in August 2005 on Geoff Barrow's (of Portishead) label Invada.

In 2006, following an appearance with Julian Cope (Lord Yatesbury) in Bournemouth, the Ramesses behemoth lumbered around the UK to complete a critically acclaimed headline tour with support from Sourvein, leaving a trail of hollow cadavers in their wake. Kerrang Magazine gave the Nottingham show a ?KKKK' rating, saying: "Ramesses is more of a drawn-out, fucked-up trio than a bar fight, although that doesn't stop Mark Greening pounding his skins so hard he has to be taken out of the PA and bassist Adam Richardson has to move onto the floor to get away from his rhythmic thunder. And even then, his battery is still louder than the rest of their primeval, psychedelic sludge. Given how formless and plodding such fare can sound, it's awesome how exhilarating Ramesses make it, even when they're going slower than a pensioner in a Skoda, dragging the listener through black, musical hell. Whether you like it or not is irrelevant, when it's this powerful, you'll feel something, be it complete revulsion or macabre joy." (by Nick Ruskell) Metal Hammer (UK) magazine said of the last gig of the tour, the sold-out London show: "You can now safely drop the 'ex-Electric Wizard' description as they have established their own identity as a great British post-doom band. The reverberations are still rumbling in our skulls long after they have left the stage. It's a night to be pissed or wrecked or otherwise out of it: and even if you are the only person in the place sipping Diet Coke, you leave staggering under the influence of a potent contact high, vaguely aware that you've just seen one of the gigs of the year." (Tommy Udo, 7/10)

In 2007, Ramesses were honoured to represent the UK by covering Eyehategod's 'Lack of Almost Everything', for a tribute CD release on Emetic Records.

Their debut album 'Misanthropic Alchemy', recorded with Billy Anderson at the mixing desk, dropped later in the year in Europe via FETO Records, a UK label owned by Mick Kenney (Mistress/Anaal Nathrakh/Exploder) and Shane Embury (Napalm Death/Lock Up/Brujeria). A limited edition double DLP of the album is to be released in March 2009 on the upcoming Spanish label Mantricum Records. Reviews for 'Misanthropic Alchemy': "We dream of Electric Wizard! We miss the original line-up each day and bless the day that the older albums just saw a new vinyl release. Ramesses will always be the band that has two thirds of Electric Wizard in them. That omen is branded in their foreheads and is still fuming. Tim Bagshaw and Mark Greening are the strongest set of rhythm in heavy doom circles. With monster guitarist Adam Richardson, Ramesses have now entered a pathway so strangely, yet beautiful with their debut 'Misanthropic Alchemy' that they do not need their back-catalogue anymore nor any comparison with one of the other Doom Gods of glorious past. They stand firm on their own feet. 'Misanthropic Alchemy' is a stunning release and I cannot help myself smiling of joy that this is still possible: to surprise me in this genre. Ramesses plays like they are walking through metres of mud, they shout down all the angels or move as liquid as maple syrup. Sometimes sweet as honey, sometimes green as diarrhoea. Sometimes fast, sometimes immensely powerful, sometimes dead slow. Nevertheless, each time the satin gloves of Billy Anderson put the effort on tape. We dream of Ramesses now! This will be a top ten release of 2007 for me. They deserve it!" 92/100 Erik / Lords of Metal (NL)

"Black Metal Magic at its Most Inaudible - You know you've got proper black metal when it sounds like someone shitting into a cement mixer while screaming down a traffic cone. Sonically speaking, this full-length debut from Dorset's Ramesses (featuring ex-Electric Wizard man Mark Greening) is a disaster, making even 'St. Anger' sound like a symphony. Drums clatter like bin lids while the guitars screech like rusty hedge trimmers doing battle with a dozen randy badgers. But it is exactly these factors that make it such a shit-kicking experience. This is a genre that's always been known, loved and just as often hated for such raw and abrasive mannerisms, and there's enough terrfying racket in these 50-odd minutes to drawn out any competition. KKKK - Ryan Bird / Kerrang (UK). Unstoppable, Ramesses again subjected Europe to their grim laments with an 18-date tour in September 2007, with their NY Brothers Unearthly Trance, playing packed shows in France, Germany, Sweden, Norway, Denmark, Holland, Belgium, and the UK ? the last date was a sold out gig at The Barfly in London.

In 2008, Ramesses were invited to play Inferno Festival in Oslo, Norway; Roadburn Festival, in Tilburg, Holland; Damnation Festival, in Leeds, UK, Hokaben Festival, London, UK ? all sold out events. Ramesses headlined a mini UK tour in March with support from Norwegian band Obliteration, and played a FETO Records showcase gig at The Underworld in London. All these generated large amounts of rave reviews:

Damnation Festival : "Ramesses are doing what they do best; coating a comfortably sized audience in a think, black miasma of crushing doom whilst remaining as humble and unassuming as ever. Even the temptation to duck off early and catch up brummie death metal legends Benediction is swiftly battered, bellowed and riffed into oblivion as you're soon carried off like a Lovecraftian protagonist who's made the mistake of falling asleep in his long lost ancestor's manor." (Metal Hammer)

FETO Showcase: " Ramesses act as tonight's black sheep, providing some respite a different brand of pummeling. It appears that early on Mark Greening's drum kit makes some derogatory comments about his mum and subsequently doesn't last long under a relentless battering. After a fairly swift recovery they open the floodgates and and drown the audience in a wave of torrential riffing. By this point the band's lack of stage presence had actually become somewhat endearing and in this instance the music speaks far louder than words." (Terrorizer) "Ramesses (7) inject their dense, weighty doom with a level of mantra-like malice that borders on the autistic" (Metal Hammer)

'Take the Curse', Ramesses' second album, is scheduled for release in the second semester of 2009, but in the meantime a very exclusive 3 inch CD was released by the band themselves , entitled 'Baptism of the Walking Dead'. The EP contain 3 tracks from 'Take The Curse' , but presented with alternative mixes. All 3 releases will feature exclusive artwork from Jake and Dinos Chapman's stunning masterpiece 'Fucking Hell'.

Mournful harmonies are the nihilistic backdrop to the ever-increasing influence of The Occult on Ramesses' twisted menagerie of animalistic odes. Although a riff tsunami remains the centrepiece, the sound is refracted through even more circles of hell ? of dirgesludge, of rhythm, of Lucifer himself. While the new album invokes a familiar sensation on the sides of the head ? that of warm blood streaming from the ears ? it takes the pummelling to new depths of doomic cruelty - and of new progressive and experimental sounds.

Huge and disturbing arrangements backed with sickening beats and haunting tones mark the new Ramesses Sound. Stunning grim melodies, and blistering spaced out guitar solos, together with multiple vokill styles add massive depth and dynamics to the opening flower of death that is Take The Curse. The Ram Family are now displaying more of their eclectic traits and 70's influences, using more atmospheric samples whilst persisting with an unsettling soundtrack to your inevitable fate...

Dedicated fans will remember the drubbings that Ramesses visited upon them before, and will revel in ?Take the Curse?. Ramesses completed a 16-date European tour, their third, with Unearthly Trance in April 2009. To commemorate this grim occasion, Ramesses recorded a track titled 'The Glorious Dead' for a limited split 10-inch with Unearthly Trance, which was released by Manchester label Future Noise Recordings.

Possessed By The Rise Of Magik

We Will Lead You To Glorious Times (EP)