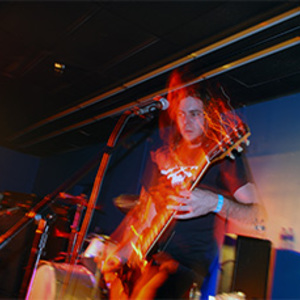 Cough was conceived in the metal fertile metal underground of Richmond, VA circa 2005. The newly formed band sought out to be the heaviest band ever from Richmond, and took inspiration from traditional doom metal bands (Sabbath, Cathedral, Pentagram, Grief, Electric Wizard, Goatsnake, etc.), grimy sludge (Sleep, Eyehategod, Cavity) and early metal (Bathory). The band self-released an EP, ?The Kingdom', in 2007, and followed it quickly with their first proper full-length ?Sigillum Luciferi' in 2008.

The band self-released an EP, ?The Kingdom', in 2007, and followed it quickly with their first proper full-length ?Sigillum Luciferi' in 2008. Recorded w/ acclaimed producer Sanford Parker (Minsk, Rwake, Pelican, Nachtmystium), ?Sigillum Luciferi' is an ugly, agonizing set of misanthropy set to music. Slight bits of psychedelia had wormed into the massive riffs and woven throughout the bands inhuman screams, making this one of the most promising pieces of doom metal to emerge from North America in quite some time.

Sporadic gigging followed the release before the band holed up in a Richmond warehouse to write the follow up. Winter 2008 was brutal, the warehouse was filthy and unheated, and the band slowly labored forward with the writing between hospital visits and bouts of near-insanity. By winter 2009/2010, the band had signed to Relapse Records and returned to Chicago, IL, enlisting Parker once again to record the follow-up to ?Sigillum Luciferi'.

That follow-up, their aptly titled Relapse debut ?Ritual Abuse', delivers thoroughly massive, psychedelic doom. The albums five epic tracks are impenetrable walls of sludge; at some points suffocating and claustrophobic, at others warped and hallucinogenic. ?Ritual Abuse' is an impressive monolith of sound and volume, and one of the finest moments yet for 21st century doom metal.

Upon its releases the band embarked on two epic North American and European tours lasting almost four months that would've broken lesser bands. No sooner did these road warriors return home, than they hit the road with Buzzoven and tattooed their uncompromising doom across L.A.'s vaunted Scion Rock Fest.

Cough are currently preparing for another US headline run, and their first ever Australian and New Zealand tours.