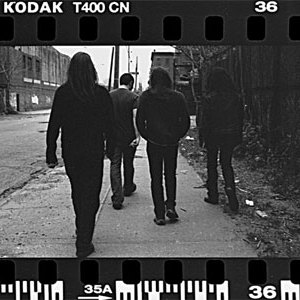 Khanate, based in New York City, NY, United States, formed in the year 2000 with the intention of setting new standards for pain and ugliness in the doom metal genre. Many people call them sludge, drone or simply extreme doom metal. Their songs are marked by dissonant, heavily down-tuned guitar/bass figures, extremely slow tempos, swarms of high-pitched feedback, and painfully shrieked vocals, making for a genuinely anguished and challenging listening experience -- put another way, their music is not for everybody.

The quartet was headed up by guitarist Stephen O'Malley (Sunn O))), Burning Witch, Sarin, Teeth of Lions Rule the Divine, Lotus Eaters, Ginnungagap, Thorr's Hammer, Fungal Hex, KTL, &AElig;thenor, Gravetemple) and bassist James Plotkin (O.L.D., Atomsmasher/ Phantomsmasher, Khlyst, James Plotkin & Tim Wyskida, Lotus Eaters, Regurgitation, etc.), two musicians whose reputations in the underground metal/experimental arenas precede them and can give listeners an idea of what to expect from the band. Rounding out the lineup were vocalist Alan Dubin (also formerly of O.L.D. and Regurgitation) and drummer Tim Wyskida (Blind Idiot God, James Plotkin & Tim Wyskida and Manbyrd). Khanate released their self-titled debut in the fall of 2001 on Southern Lord Records, a 12"EP 'Dead/ No Joy (remix)' off of Load Records in 2003, their second long player, 'Things Viral' off of Load Records (vinyl) and Southern Lord (CD) in 2003 and the 'Capture/ Release' mini-album released by Hydrahead Records (US version) and Trust No One Records (Euro pic-disc) in 2005. There are also two DVDs as well as a handful of live releases self released by the band and by Archive Records ('It's Cold When Birds Fall From the Sky', 2005).

As of September 24, 2006, Khanate have called it quits. Japanese re-issue CDs of the debut, 'Things Viral' and 'Capture/Release' albums are out now via Daymare Recordings. Each contain a second bonus disc with out-of-print and rare material but 'Capture/Release' contains the 'Dead & Live Aktions' DVD as its bonus. The posthumous album entitled "Clean Hands Go Foul" has been released in January 2009 on vinyl and digipack CD with bonus DVD "Capture & Release" on Hydra Head, picture LP on Trust No One and Japanese papersleeve CD version on Daymare.

It's Cold When Birds Fall From The Sky (Live)