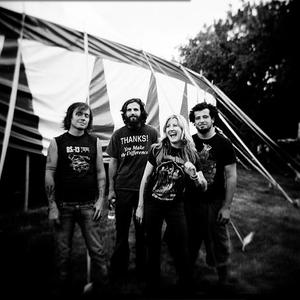 Since this Savannah, Georgia, United States quintet first formed in early 2001, worrying about genre limitations has never been a priority. Taking musical chances, however, always has been. While Kylesa are as heavy as any band out there, they are beholden to no one scene and no preconceived notions of what heavy music should be. "Lots of people like to stick to one kind of music," guitarist/vocalist Phillip Cope elaborates, "and even with the underground, lots of people segregate themselves into small little categories and place lots of imaginary rules on these scenes."

"Lots of people like to stick to one kind of music," guitarist/vocalist Phillip Cope elaborates, "and even with the underground, lots of people segregate themselves into small little categories and place lots of imaginary rules on these scenes."

?We just like playing heavy music and we've always liked playing it regardless of what is popular or trendy,? guitarist/vocalist Laura Pleasants adds. ?It's most rewarding for us to try and push our own boundaries of what we can to do with our music and hopefully, in the end, offer something that is at least original.?

Kylesa's third full-length, Time Will Fuse Its Worth, is the eagerly-awaited follow-up to 2005's To Walk A Middle Course, which topped many year end lists and landed the band in metal and mainstream press alike. After grabbing ink in Spin, the New York Times, and metal mainstays Revolver alike, Time Will Fuse Its Worth again showcases the band as the ultimate definition of do-it-yourself dedication. With Cope lending his ears and hands for production duties at The Jam Room, and featuring comprehensive artistic layout and packaging from Pleasants, the Kylesa of current day continues to put the band's future in their own hands by relentlessly touring Europe and North America alike.

Time Will Fuse Its Worth sees the band continuing to evolve upon Kylesa's signature sound, seamlessly flowing from track to track encompassing listeners with sounds far and wide and an utter disregard for musical boundaries. Bringing together avant-garde experimentalism with the pure fury of dirty, sludgy riffs and raw, coexisting male and female vocals, Kylesa's ambient noise interludes, grimy rock riffs and impassioned, gruff vocals portray the doom-inspired punishment they are capable of dishing out through the power of the band's music.

Following the release of Time Will Fuse Its Worth, the drumming duo of Jeff Porter and Carl McGinley were added to the band. ?When we first started the band, we had planned on having two drummers but it didn't work out, so now it feels like everything is coming together,? Pleasants says. ?There is definitely a new level of intensity to Kylesa now. Since the new lineup has gotten together we have felt the strongest creative spark yet.?

The band's reluctance to attach itself to one sound or scene and to not play by conventional rules, along with a strong creative spark, has ultimately made Kylesa that much more versatile. With a constant touring schedule the band has found themselves crossing old boundaries, sharing bills with bands as diverse as High On Fire, Pinback, Coliseum, Torche, and Mastodon. The diversity of the lineups has also led Kylesa to playing in front of unique enthusiastic crowds throughout Europe. "While we are no kings of one scene," says Phillip Cope, "we have, in a sense, just developed our own thing.?

Time Will Fuse It's Worth

To Walk A Middle Course