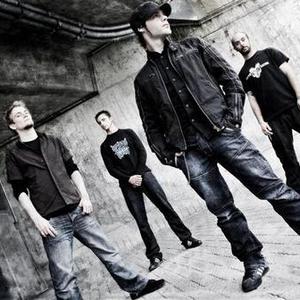 Formed in 2003 in Geneva, Switzerland by guitar player Drop and singer Benjamin, Sybreed was created to reflect their mutual tastes for metal and industrial music, with conceptual contents revolving around social misery, everyday alienation and the decay of the modern way of life in general. Later, they began work on material for their first album SLAVE DESIGN which was released in 2004, and then performed around the US to unleash the album's electronic violence on stage.

Meanwhile, Drop began to compose on what would become the Slave Design's successor, re-introducing Black and Death metal influences in the process, and thus injecting a new dimension of brutality in their music. At the same time, it further developed the melodic side of the music, increased the use of clean vocals, but retained an electronic touch making Sybreed's sound easily recognizable among others. For the occasion, the band hired Soilwork's drummer Dirk Verbeuren, who kindly accepted to record Sybreed's new album. Later, Kevin joined the band, bringing stability back into Sybreed's line-up.

Having joined forces with the French label LISTENABLE RECORDS, Sybreed released their second album ANTARES in October 2007. This new LP was widely praised in the international metal press for its catchy tunes and the original use of melodies, and gave Sybreed the opportunity to open for PAIN for a couple of shows, and then embark with SAMAEL for a European tour in April 2008. This finally led them to play at the METAL CAMP Festival in Slovenia.

Nevertheless, they soon felt the urge to work on a third album. The next album would push the limits of their music to an extreme end, reinvent Sybreed's sound, and turn it into something the band would describe as ?Death Wave?. Drop, Ben and Kevin planned regular session during fall 2008, sessions which gave birth at the end of the year to twelve tracks of both sonic aggression and ethereal atmospheres where the organic and the electronic would be finally reconciled in one sole entity. To achieve the coming of this cybernetic monster, it was decided that only one artist could handle the difficult task of giving it a final form: Rhys Fulber. Known for his work with Front Line Assembly, Fear Factory and Paradise Lost, he became the man in charge of the mixing this new album.

After a North-American Tour with Threat Signal in summer of 2009, and welcoming their new bass player Steph, Sybreed is now complete and ready to unleashed their new synth-pop/industrial/metal bastard spawn called ?THE PULSE OF AWAKENING?: So as to say, the perfect tool to ravage your ears with vicious grooves, furious metallic blast, technological shivers and icy melodies.

Sybreed recently finished their fourth full length release "GOD IS AN AUTOMATON" scheduled for release in September of 2012. It is the first album with their newest member, bassist Ales.
http://www.sybreed.com/

God Is An Automaton

The Pulse Of Awakening