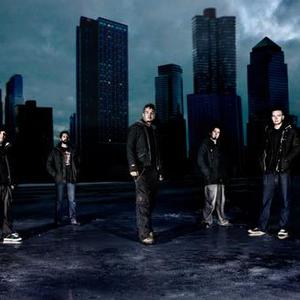 The Danish Industrial Metal band THE INTERBEING was created in 2006. Shortly after in 2008 the band received a nomination for the Talent of the Year Award at the Danish Metal Awards and in 2010 the band won the award for Best Metal Act at the Underground Music Awards. In May 2011 the debut album 'Edge of the Obscure' was released through Mighty Music/Target Distribution and the release underlined THE INTERBEING to be a well defined and visionary band.

THE INTERBEING combines the heavy sound of Scandinavian metal with the gloomy atmosphere of electronic genres. Tight, aggressive, melodic and atmospheric are the key concepts in their sound. Their inspirations range from Meshuggah's polyrhythmic and syncopated universe to the melodic aspects of Soilwork combined with the sombre and shuffling electronic soundscapes that you find with Massive Attack and Amon Tobin, ending up with a kind of Industrial Metal in the spirit of Fear Factory.

The sound goes hand in hand with the lyrics that revolve around a fictional inner being which the listener follows through dystopian worlds to lastly reach the edge of the obscure.
'Edge of the Obscure' was received with high praise from national and international critics including the esteemed Danish magazine GAFFA which gave the album 5 out of 6 stars and commented: "Edge of the Obscure is without doubt the best Danish metal album I've heard this year." With the same number of stars Aarhus Stiftstidende commented the album to be: "A futuristic Metal achievement which bears witness to a frightening new level ...?. The album went on to be number 1 in GAFFA reviewer Keld Rud's list of best Metal albums in 2011.

In Europe the album has been appraised in the biggest metal medias:
? Hard Rock (FR) - 9 out of 10 stars: "The Danes perfectly master their instruments and mixing them with electronic sounds and different atmospheres that make the album a pearl of its kind."
? Legacy (DE) - 13 out of 15 stars: ?Ein weiteres kapitel des "Danish Dynamite" ?ffnet sich.?
? Metal Hammer (UK) - 8 out of 10 stars: "... an album with refined character and a compelling undercurrent of dark sci-fi drama."

As a result Metal Hammer UK also handpicked THE INTERBEING to participate in their showcase on the internationally recognized music festival South By Southwest (SXSW 2012) in Austin, Texas USA. Metal Hammer's editor Alexander Milas complimented the band in the context: "We have deemed them to be of immense international import."

With numerous concerts in 2011 the band has marked themselves to be a strong live act which takes the concept of stage performance to a higher level.
In the spring of 2012 the band heads on the first official tour after the release of 'Edge of the Obscure' and in that context the tour is named "Tour of the Obscure" and involves eight of the leading club scenes in Denmark. This summer the band is also headlining the upcoming stage on the biggest Danish metalfestival, Copenhell, side by side with names like Meshuggah, Slayer, Marilyn Manson, Lamb of God and Mastodon.

Edge Of The Obscure (Japanese Edition)

Edge Of The Obscure