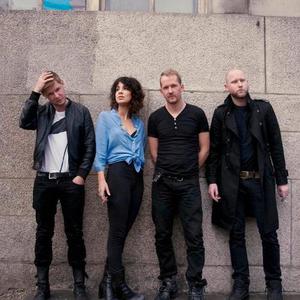 Pure Reason Revolution formed at the University of Westminster, United Kingdom, in 2003. Their music incorporates elements of progressive rock, grunge rock and electro, with its vocal harmonies reflecting those of The Beach Boys. Members have a shared appreciation for the work of bands such as Pink Floyd, Led Zeppelin, Porcupine Tree, Justice, Nine Inch Nails, Nirvana, The Smashing Pumpkins, and Super Furry Animals.

Pure Reason Revolution began life as a Reading outfit named The Sunset Sound, and featured Jon Courtney, Andrew Courtney, Chloe Alper and, for a short while, Jim Dobson. Jon and Andrew Courtney had previously played with pop guitar band GEL, and were signed by Seymour Stein to his Sire record label, home of Madonna, The Undertones, The Ramones and Ice-T. Chloe used to front the Period Pains, who scored a minor hit with an anti-Spice Girls song.

Whilst at Westminster University, Jon met Jim Dobson and Greg Jong and discovered they were musically compatible. Pure Reason Revolution was born.

The band signed to Alan McGee's Poptones label for a one-off release of Apprentice of the Universe (no 12 in the indie charts, no 74 nationally).

Signing to SONYBMG in autumn 2004, the following year saw the band release two singles - the 12-minute long Bright Ambassadors of Morning (the title is from a line in Pink Floyd's Echoes on the Meddle album), and The Intention Craft - plus a mini-album, Cautionary Tales For The Brave. The use of so many of the proposed album tracks on a mini-album led the band to develop some new material for the album, including The Twyncyn / Trembling Willows. All releases were all on the band's own Holograph imprint, via SonyBMG.

In March 2005, the band played the South-by-Southwest festival in Texas, before playing, Boston, New York, and Montreal club shows. Back in the UK Pure Reason Revolution supported Mew, Hope of the States, Blackfield and Oceansize as well as headlining their own gigs and recorded sessions for Mark Radcliffe's Radio Two show and XFM.

In spring 2005, Jong left the band, to be replaced by another Westminster pal Jamie Willcox, though it is Jong's work featured on recorded output up to, and including, Cautionary Tales for the Brave. Both Jong and Willcox receive credits on the The Dark Third album.

The band regularly allows fans to listen to streaming material via its myspace website including works in progress and exclusive Christmas tracks.

The first full-length album, The Dark Third was released in the UK on April 10th 2006, and was produced by Paul Northfield (Rush, Porcupine Tree, Gentle Giant, Hole). A US version of the album containing the original, pre-Cautionary Tales mooted tracklisting and amended artwork was released in the USA on 25 July 26 2006 and in Feb 2007 a 2CD version of the album (combining US and UK albums plus extra tracks) was released throughout Europe on Insideout Music

In the summer of 2006, it was announced that due to his wife being pregnant with their first child Andrew Courtney was to leave the band. He was replaced with Paul Glover, formerly of the band Wire Jesus. The departure of Courtney was closely followed by the departure of Jim Dobson, in November 2006.

Now a four-piece Pure Reason Revolution did their first European tour supporting Blackfield in February 2007. In June, the band journeyed to the US again to play club dates in Boston, New York and Philidelphia, followed by NEARfest, the renowned progressive/art rock festival. Pure Reason Revolution also opened for Porcupine Tree on their 'Tour Of A Blank Planet' European tour in June/July 2007.

A live album of their NEARfest performance was released in June 2008 and their second album, Amor Vincit Omnia, was released on March 9th 2009 on Superball Music, taking the band's sound in a more electronic direction.

The band are set to release their third studio album, Hammer & Anvil on 18 October 2010. (25 October in the U.S.) This album is deals with a variety of themes but is particularly influenced by war and takes the bands sound deeper into the electronic realm while simultaneously building on their progressive roots. It is co-produced by Jon Courtney and Tom Bellamy (The Cooper Temple Clause,Losers)

After touring in 2010 and 2011 the band announced on 9th of August 2011, they would be splitting up. On November 5th they released their final album: an EP called Valour.