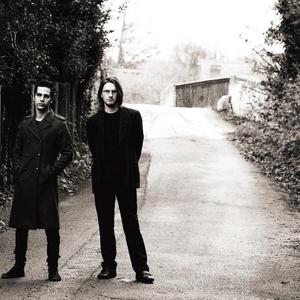 Blackfield is a collaboratory music project by Porcupine Tree founder and lead singer Steven Wilson and Israeli rock singer Aviv Geffen. They have released three albums under the moniker: Blackfield and Blackfield II as equal partners, and Welcome to my DNA with Geffen taking a more dominant role. A fourth studio album, yet to be titled, is currently being worked on, with Wilson taking an even more passive role.

Formed after a meeting in 2000, the partnership blossomed into a cross-cultural collaboration called Blackfield.

Aviv had discovered Porcupine Tree in the mid ?90s and followed their career development. In 2000 he invited the band to perform some concerts in Israel and met with Steven in London to discuss working together. Before long they had collaborated on the first Blackfield song. In 2001 the two met in a studio in Tel Aviv with the intention of recording a one-off EP.

The results of the session were so impressive however, that the EP was cancelled and the decision was made to continue writing and recording a full length album. Over the next 18 months the pair fitted in Blackfield writing and recording sessions whenever they could between their other commitments and finally in October 2003 the debut album was complete.

The collaborative songs alongside songs written by each separately brought a unique meeting of cultures, which resulted in the self titled album, which was hailed at the time as 'hypnotically effective' (Classic Rock) and ?another strike of genius from Steven Wilson' (Eclipsed).

Blackfield II arrived in February 2007. The pair's return was greeted by an equally enthusiastic media response with Clash describing it as ?a lush but soulful mix of separate cultures, deep sounds and touching lyrics,' and CMU proclaiming it as ?simply another complete triumph from the duo.'

In January 2009, to promote his first English-language European release, Geffen went on a small tour of Europe with the Blackfield live band, including Wilson being billed as a special guest. Half of the set consisted of songs from the then yet to be released first English language solo album by Geffen while the rest was a selection of Blackfield songs. Wilson would also appear on three tracks from the album.

In April 2010, Geffen and Wilson got into studio to begin writing the follow-up to Blackfield II. However, this time, all songs, with the exception of the track "Waving", were written by Geffen, as Wilson had been concentrating on his second solo album, Grace for Drowning, at the same time. Wilson only performed lead vocals on five of the eleven tracks, but provide backing or co-vocals on several other tracks. Their third album, Welcome to my DNA, was released on the 28th of March 2011 and supported by a European and North American tour following a kickoff concert in Israel. However, several concert dates were cancelled due to the death of Wilson's father in May 2011.

After touring for Welcome to my DNA was completed, Wilson confirmed that with Blackfield, like the majority of his other projects, he himself had no particular plans for the future, but the project wasn't necessarily over either. However, in January 2012, Geffen has announced his intentions to release a fourth Blackfield album by May 2012. This prompted Wilson to announce that his role would continue to lessen, with Wilson acting only as a contributor and mixer. Wilson said of the band's future:

"Aviv has written the new record now. It's his project now, although I'm still helping him ? I'm mixing the record and singing one song on it. I didn't want to be holding him back. One of the questions people always ask me is ?How do you do all these things?' Well, the answer is: I can't. Now that the solo project is taking up so much time, I had to leave Blackfield to Aviv."

On January 29 and January 30, both Geffen and Wilson were in the studio working on vocals and guitar for the upcoming, currently untitled, fourth album. Wilson stated that he will contribute lead vocals to only one song, but is also contributing "a bunch of guitar parts" and "arranging backing vocals". Despite his lessened role, he still said that he was "protective of the Blackfield legacy", and that the next album would "still sound like a quintessential Blackfield album." One of the guest vocalists that Wilson had alluded to before, was revealed to be Vincent Cavanagh of the band Anathema, who recorded vocals for a track.

On June 14, 2012, Geffen announced he was in the final mixing stages of the album with Wilson.

Open Mind: The Best Of Blackfield

Welcome to My DNA