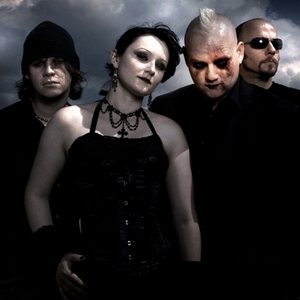 Mono Inc. rose from the ashes of several band projects, the frustrations of being forced into unwelcome directions by major record labels and the fervent wish to make uncompromising music. Founder members were Martin Engler, mastermind and songwriter, Carl Fornia and Miky Mono. In 2003 Manuel Antoni joined the band on bass guitar and also as a sound designer.It was made clear from the start that Mono Inc. would never sell their souls for a major record label deal and they decided to sign with the independent label NoCut. Their debut album Head Under Water was released in 2004 and was critically acclaimed as a new sound called ?MONOROCK'. Two singles from the album made appearances in the most important German trend charts for rock, metal and gothic music such as DAC, MRC30 and Native25. The release was followed by extensive touring throughout Germany and Europe.

At the end of 2006, as the band gathered in the studio to prepare the material for the 2nd album, they were witness to a totally unexpected event: the break-up between the band and their front man; after endless discussions and the odd flying instrument the tensions between Martin and Miky had run so high that the band asked Miky to leave and decreed that Martin should take over the microphone.
Strangely this was not a spectacular change in sound for the band, as they were so used to Martin's voice from his many demos, and he has been lead vocalist ever since. The free seat behind the drums was soon occupied by Katha Mia, probably Germany's best-looking female drummer.

Martin and Katha first met backstage at a Depeche Mode concert in Aarhus, Denmark, in the summer of 2006. Katha knew of Mono Inc. and half-jokingly offered her percussive services in the event of Martin ever breaking a hand during the drum solo. He remembered this kind, misguided offer and decided to take a chance and invite her to the studio. On that fateful day the band was immediately, jaw-droppingly impressed by this sweet, enchanting beauty who sat behind the drumkit and packed such an unbelievable punch. The decision to grab her was made in seconds. With this exciting new line-up complete, the band relished recording their 2nd longplayer Temple Of The Torn, which was released worldwide in June 2007.

The Hit-Single of this album (In My Heart) was the key for Mono Inc. to becoming a constant component of every Rock-DJ's program and was changing the bands status of being an insiders' tip into being resounded throughout the land. The 2nd half of the year 2007 the band enjoyed their new born harmony on the road and played all over the country and entered the next level when their song Burn Me was picked to become theme music of a new serial by a big German TV station. This serial started in September 2007 and still continues?

And now, in May 2008, Mono Inc. is back with a vengeance! The 3rd album CD Pain, Love and Poetry is steamrollering the gothic-scenery only 11 months after their last full length album. And it's once again full of unbelievably good compositions. Musically the new album has everything we've come to expect from this band: breathtaking drum patterns, soaring bass lines, rich guitar walls, gorgeous keyboard pads and empathetic vocals create an evocative soundscape that captures the listener immediately. That's what we expected? but Martin is singing his new songs with more confidence and authority than ever and you feel and believe every single word and note.
Lyrically the focus is (as the title already implies) intensely personal throughout, and anyone who has experienced the ups and downs (especially the downs) of love will find himself poetically echoed here. The first single Teach Me to Love, which comes as a duet with Lisa Middelhauve (female ex-vocalist of Goth-Metal-Band Xandria).
Not to be slowed down Mono inc released the EP Comedown in 2010, and the EP Revenge in 2011. Full Length albums poured out in the shape of Viva Hades in 2011 and freshly released After The War full length and EP. Listen now and fall deeply and lastingly in love with Germanys Dark-Rockers...

The Book Of Fire

Together Till The End