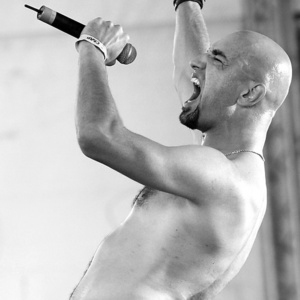 After leaving Megaherz because of creative differences in 2003, Alexx Wesselsky got together with Noel Pix, who composed the synths and programming for Megaherz's albums Himmelfahrt and Kopfschuss. Eisbrecher, the brainchild of the two men, combines their musical ideas, concepts, and styles.

Eisbrecher, like Megaherz, has a much stronger fan base abroad (especially in the USA) than in Germany itself.

The band's name in translation from German means "Icebreaker" (not the kind you experience in parties and at meetings, but rather the special-purpose ship or boat designed to move and navigate through ice-covered waters). Indeed, the band's lyrics and slogans often include terms of ice and sailing, such as "Ahoi" (Ahoy) and "Es wird kalt" (It's getting cold). The band's frontman, Alexx Wesselsky, often wears sailor's and military clothing in performances.

While the self-titled debut album Eisbrecher has more of an EBM and electronic sound, its successive release, Antik?rper, has a far heavier, more metallic style. However, the band remained true to its roots, and the albums are recognizable as being by the same group, because the group's identity remained firmly attached to the industrial-metal genre of rock music.

The year 2008 saw the release of Eisbrecher's third album, "S?nde." It followed on the heels of the single "Kann denn Liebe S?nde Sein?," which was released midsummer 2008.