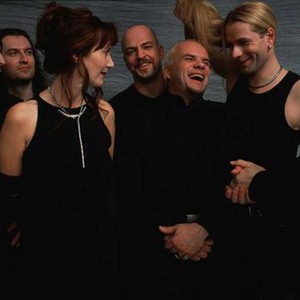 Subway to Sally was founded in Potsdam, Germany, in the early 1990s. It is a rock band with clear folk and medieval influences, later also with gothic and metal elements added to the mix. With their continuous inclusion of oriental sounds and elements of classical music (noted for instance by the use of the arrangements of the backup vocals) and the use of instruments less frequently seen in metal bands, such as bagpipes, shawm, violin, hurdy-gurdy and lute, the band has acquired the label of medieval metal.

They have released 8 studio albums, two live album and two live DVD?s. Their fame is mainly in the German-speaking countries, having played only a handful of concerts outside of their "turf".

Subway to Sally was an idea that was a long time coming. The very first concert given in the name was held in September of 1990. The band then consisted of Ingo Hampf, Bodenski, Simon, Coni (trumpet) and Guido (drums). Their first appearance onstage in the constellation with which they later recorded their first album (Album 1994), was given in the Potsdamer "Stube" in January 1992. The group had decided on needing a fiddle to complete the sound, something which brought Frau Schmitt (Silke Volland) to the band, who in turn introduced Eric Fish (Eric Hecht) on the bagpipes.

In the early years, Subway to Sally played Irish / Scottish inspired folk rock, as reflected by the tracklist of their first album, being the only album where the majority of songs are in English (for this they hired a friend to write lyrics in English). The group then decided they wanted to keep their lyrics in German, thus being a part of the first wave of bands to do so after the Berlin wall broke down. Their second album, released in 1995 and aptly named MCMXCV, saw a mixture of biblically inspired lyrics and what is often referred to as "medieval" music, thus placing the label "medieval metal" firmly onto their foreheads. It is a label that they still are being confronted with, though the music can hardly be described as such and though the band repeatedly tries to deny this. Three major changes can be noted with the release of MCMXCV: Firstly, the appearing of the self-written German lyrics penned by Bodenski, secondly, Eric Fish moved up from being the piper to being the frontman and main singer. Thirdly, the focus of the music was no longer on folklore with the occasional self-composed song tossed in for measure, but was turned around to exactly the opposite, with the two translated folk songs "Kr?henfra?" ("Twa Corbies") and "Carrickfergus" adapted to fit the band's style.

Between 1994 and 1997 the band rapidly released four albums and toured Germany to exhaustion, with an average of around 100 concerts (take or give a few) per year. Drummer T.W. left the band in 1997, after completing the recordings of "Foppt Den D&auml;mon", being replaced by David P?tsch for the tour and the following albums. "Der Sturm" was the first chart entry of the band, but they were quite consequently ignored by the radio and music television channels. With "Hochzeit" the band broke their habits and spent more time on producing the album, leading to a more polished and worked-through sound. This payed off with another chart placement: the album made it to #19 in the official charts. The sound of "Hochzeit" is very much picked up by the next studio album, "Herzblut", though thematically moving in a different direction. Where "Hochzeit" is darker and ends on the note of "M?de" ("Tired") "Ach, ich bin von dieser Welt so m?d'" ("Oh, I am so tired of this world"), "Herzblut" starts off with the energetic "die Schlacht" ("the battle"), declearing that "Ich gewinne diese Schlacht" ("I win this battle").

In 2003 the album "Engelskrieger" was released. In preparation of the release, the band made the lyrics available on their home page, leading to wild discussions and accusations of "selling out". The sound of the record, breaking clearly with their previous works, did nothing to silence those accusations. Subway to Sally had grown up, met up with the real world and made a deeply disturbing record, dealing with modern issues on modern terms. The lyrics were no longer veiled and styled old-fashionedly, but instead painfully direct, as was the music, delivered with more brute and force. "Wenn Engel hassen" ("When angels hate") from "Herzblut" can be said to explore the same terrain that "Geist des Kriegers" ("Spirit of the warrior") does, dealing with an individual running amok, though the latter is firmly lodged in the "post 9/11"-world. Several band members have indeed emphasised the impact of the attacks of the Twin Towers and the following political events as inspirational source for the album. Other songs deal with incest, euthanasia, leaders who mis-lead their people and the general fall and corruption of our western society. "Engelskrieger" entered the German charts at #9, and the band once more toured extensively. A live DVD was filmed in the Columbiahalle in Berlin on the first leg of the tour, leading to the release of a double DVD in the autumn of 2003. In April 2004 Subway to Sally changed label, leaving Universal (Motor) for the smaller metal-label Nuclear Blast.

The very last concert of 2004, the all-yearly concert in Lindenpark (Potsdam) on the 30/12, was also the last concert of drummer David P?tsch, who left the band to pursue another musical direction with the Blue Man Group in Berlin. The band then spent half a year looking for a replacement, finally deciding on Simon Michael Schmitt to replace David. (On a side-note this has lead to a great deal of confusion, as there are now 2 Simons, 3 Michaels and 2 Schmitts in the band.) The recording of the new album was already finished by the time "tiny Simon" joined the band.

Despite being very pleased with the outcome of "Engelskrieger", the band made no secret of it being a one-off and of returning to the more conventional "Sally-sound" with the next studio recording. "Nord Nord Ost" was originally planned to be released in 2004, but was delayed until fall 2005, due to the extensiveness of the production. Though the band have previously made use of musicians from outside the band, they now did so on a bigger scale, involving the Deutsches Filmorchester Babelsberg to create a wider and more orchestral sound. The album debuted at #5 in the official charts, the highest chart placement the band has seen to date.

In 2006 they released an acoustic CD/DVD reminiscent of their pre-Hochzeit sound called Nackt ("Naked"), followed by another album in the vein of Nord Nord Ost, titled Bastard, in Fall 2007.

Several of the band members have side- or solo-projects going. Wanting to "return to his roots" as a musician, Eric Fish started touring on his own in 1999. This project has now grown up to become a band in its own right, and two CDs have been released; "Auge in Auge" and "Zwilling". Eric is also involved in a hitherto online-only project called Wei? and often appears as a guest musician on records of other bands (for instance with Letzte Instanz and Fiddler's Green). Bodenski has published a book of poems, called "Inniglich", which draws heavily on his lyrics for Subway to Sally, but also contains other works and non-published Sally songs. Little Simon also plays in the powermetal band Silverlane. Frau Schmitt used to be a member of the somewhat "folkyjazzy" ensemble 17 Hippies.