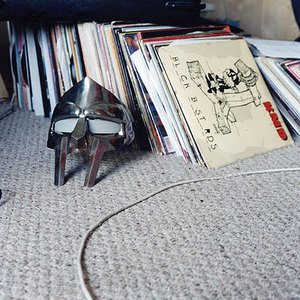 Daniel Dumile ("doom-uh-lay") is a British born American hip-hop artist who has taken on several stage names in his career, most famously MF DOOM (standing for metal fingers/metal face doom). He has also been known as Zev Love X, King Geedorah, Metal Fingers, Viktor Vaughn, Doom, and has appeared in several collaborative projects such as DANGERDOOM (with Danger Mouse) and Madvillain (with Madlib). Little is known about his personal life.

Dumile's eccentric wordplay makes him a favorite of underground hip-hop fans. He is heavily influenced by American comic books (especially the Fantastic Four and their battles with Dr. Doom). Japanese science fiction is also an influence; the concept for King Geedorah (which is derived from Ghidorah) and the Monsta Island Czars comes from the Godzilla movie series. He is also renowned for bringing comedy back into the sometimes overly serious world of rap lyrics and a unique, sample-heavy production style.

His work with Madvillain has been covered by the New Yorker, as has his entire career.

Dumile was born on January 9, 1971 in London, England, the son of a Trinidadian mother and Zimbabwean father. He then moved with his family to New York and was raised in the city of Long Beach, New York on Long Island

As Zev Love X, he formed the group KMD in 1988 with his younger brother DJ Subroc and another MC called Onyx the Birthstone Kid. A&R rep Dante Ross learned of KMD from the hip hop group 3rd Bass, and signed the group to Elektra Records.

Dumile and KMD's recorded debut came on 3rd Bass's song "The Gas Face" from The Cactus Album, followed in 1991 with KMD's album Mr. Hood, which became a minor hit through its singles "Peachfuzz," "Who Me?" and heavy video play on cable TV's Yo! MTV Raps and Rap City.

Subroc was struck and killed by a car in 1993 while attempting to cross a Long Island expressway before the release of a second KMD album, titled Black Bastards. The group was subsequently dropped from Elektra Records that same week. Before the release of the album, it was shelved due to controversy over its cover art, which featured a cartoon of a stereotypical pickaninny or sambo character being hanged from the gallows.

With the loss of his brother, Dumile retreated from the hip-hop scene from 1994 to 1997. He testifies to disillusionment and depression, living "damn near homeless, walking the streets of Manhattan, sleeping on benches." In the late 1990s, he left New York City and settled in Atlanta. According to interviews with Doom, he was also "recovering from his wounds" and swearing revenge "against the industry that so badly deformed him." Black Bastards had become bootlegged at the time, leading to Doom's rise in the underground hip-hop world.

In 1997, Dumile began freestyling incognito at open-mic events at the Nuyorican Poets Caf? in Manhattan, obscuring his face by putting a stocking over his head. He meanwhile had taken on a new identity, MF Doom, patterned after and wearing a mask similar to that of Marvel Comics super-villain Doctor Doom, who is depicted rapping on the cover of the 1999 album Operation: Doomsday. However, the MF Doom mask more closely resembles the same mask that Russel Crowe wears in the movie, "Gladiator" during the matches at the Colosseum, so it is unclear at this point as to exactly where the mask inspiration originated from. He wears this mask while performing and isn't photographed without it, except for very short glimpses in videos such as Viktor Vaughn's "Mr. Clean," "?," and in earlier photos with KMD. MF Doom's mask has undergone at least one design revision since its adoption (it is now an altered version of the mask worn by the character Maximus Decimus Meridius in the film Gladiator).
[edit] Early career

Among the collaborators on these tracks were fellow members of the Monsta Island Czars collective (The M.I.C.), for which each artist took on the persona of a monster from the Godzilla mythos. Dumile went by the alias "King Ghidra" (a three-headed golden dragon "space monster"), and some of his appearances on the LP are as, and are credited to this persona, instead of that of MF DOOM. Dumile would revisit this character later under various name-spellings.

In the years intervening before his next full-length solo release, and continually since, Dumile has appeared on several tracks on other artists' LPs and remixes, contributed one-off tracks to compilations, and done various guest production work.

With few exceptions Dumile produces (creates) the instrumentation tracks for his solo releases.

Beginning in 2001, under the "Metal Fingers" moniker, Dumile began releasing his Special Herbs instrumentals series. Many of these beats can be heard as the instrumentation tracks throughout his body of work. A separate website catalogs for which tracks each instrumental has been used.

In 2003, Dumile released the King Geedorah album Take Me to Your Leader. Geedorah is credited as producer (also, in this context: beat-maker), but only appears as an MC on four tracks. The majority of vocal tracks feature guest MCs, and the album features several instrumental montages of sampled vocals from old movies and TV shows?a technique employed on most of Dumile's albums. Both Venomous Villain and Take Me to Your Leader feature appearances by MF DOOM.

Also in 2003, Dumile released the LP Vaudeville Villain under the moniker Viktor Vaughn (another play on Doctor Doom, whose "real name" is Victor von Doom). In 2004 he released a follow-up LP, Venomous Villain (also called VV2).

And, in 2004, the second MF DOOM album MM..Food was released by the Minnesota-based label Rhymesayers Entertainment.

DOOM's first commercial breakthrough came in 2004, with the album Madvillainy, created with producer Madlib under the group name Madvillain. Released by Stones Throw Records, the album was a critical and commercial success. MF Doom was seen by mainstream audiences for the first time as Madvillain received publicity and acclaim in publications such as Rolling Stone, Washington Post, New York Times, The New Yorker, and Spin. A video for "All Caps" and a four-date U.S. tour followed the release of Madvillainy. Additional videos for "Rhinestone Cowboy" and "Accordion," both directed by Andrew Gura, were released on the DVDs Stones Throw 101 and "Stones Throw 102: In Living the True Gods," respectively.

Though still an independent artist, MF DOOM took a bigger step towards the mainstream in 2005 with The Mouse and the Mask, a collaboration with producer DJ Danger Mouse under the group name Danger Doom. The album, released on October 11, 2005 by Epitaph, was done in cooperation with Cartoon Network's Adult Swim and featured voice-actors and characters from its programs (mostly Aqua Teen Hunger Force). Danger Doom reached #41 on the Billboard 200. In 2006 Doom hosted the [adult swim] Christmas special and he could be seen in between shows, usually talking about what was up next, and making jokes. DOOM also made an appearance in "November Has Come", a track on Gorillaz's 2005 album Demon Days, which reached #6 on the Billboard 200.

MF DOOM produced tracks for both of Ghostface Killah's 2006 albums Fishscale and More Fish, and the two are currently at work on a collaboration album titled Swift & Changeable. So far only one track has been released from the album, "Angels," which appeared on a Nature Sounds compilation in late 2006, and later re-released in a different fashion on DOOM's 2009 album Born Like This. DOOM has also revealed plans for a second Madvillain album with producer Madlib, with one song, "Monkey Suite," first appearing on the Adult Swim/Stones Throw Records album Chrome Children, later it appeared on Madvillainy 2 - The Madlib Remix. Other potential projects mentioned by DOOM include new albums from Danger Doom, KMD, as well as further albums under both his Viktor Vaughn and King Geedorah aliases. However, many such DOOM projects have been rumored in recent years without materializing.

Despite no new DOOM releases in 2006, Kidrobot and Stones Throw released an 8" tall Madvillain toy available to coincide with the release of the Chrome Children CD/DVD (hosted by Peanut Butter Wolf) which featured a DVD performance of Madvillain and several other Stones Throw artists. MF DOOM also continued to work with Adult Swim doing voice-over work as Sherman the Giraffe on Perfect Hair Forever, being the voice for The Boondocks ads and previews and hosting their Christmas Eve 2006 programming.

In late January 2009, Lex records confirmed DOOM's new album title to be Born Like This, and that the "MF" would be dropped from his name, now just DOOM[10]. The album was released worldwide on March 24, 2009. As a teaser, the track "Ballskin" was posted on Doom's Myspace page on January 13, 2009. Snippets of the entire album were made available for streaming on DOOM's MySpace on the album's release date. The title for the album was inspired by the poem "Dinosauria, We" by 1970s and 1980s poet Charles Bukowski. DOOM samples a performance of the poem by Bukowski on the track "Cellz." Previously, DOOM used a Bukowski sample for a vocal interlude on 2004's "All Outta Ale." Thom Yorke of Radiohead remixed the track "Gazillion Ear," which is available as an iTunes-only bonus track. June 26, 2009 Kurious released 'II' which featured DOOM on the song "Benetton".

On May 26, 2010, the first single for the next Madvillain album was dropped through Adult Swim. "Expektoration," a live DOOM album, will be released Sept. 14, 2010 through Gold Dust Media. In mid 2010, DOOM released 'DOOM!', a collection of greatest hits, B-Sides and rareties, including the theme for GTA: Chinatown Wars featuring Ghostface Killah and Biochemical Equation, featuring the RZA.

Just remember ALL CAPS when you spell the man name.