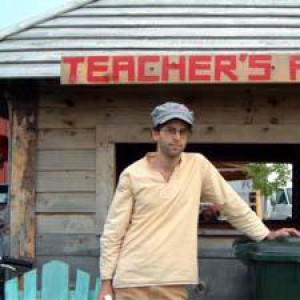 Paul Barman grew up in the suburban splendor of Ridgewood, New Jersey. Even as a child he dreamed of being an architect of dialect. During a summer camp field trip, Paul purchased The Dead Kennedys' Give Me Convenience or Give Me Death and De La Soul's Three Feet High and Rising. These tapes flipped his five-sided cage upside down. The roof became the floor, and the new roof was open. Years later, when he heard the combination of Wu-Tang's intense wordplay and Ol' Dirty Bastard's exuberant energy, Paul's sketchbooks began to go from drawings to lyrics.

Years later, when he heard the combination of Wu-Tang's intense wordplay and Ol' Dirty Bastard's exuberant energy, Paul's sketchbooks began to go from drawings to lyrics.

In 1998, Househusband Records released Postgraduate Work, Paul's self-produced 7". It included the dusted, yet intelligent, "Enter Pan-Man" about a slimy recent college graduate who gets horn and hoof implants to become a marginal star, eventually retiring to Westchester as a bad dad with arthritis.

"Enter Pan-Man" caught the ears of left-field hip-hop producer Prince Paul, who offered Barman the chance to work with him on a project. The result of their collaboration, It's Very Stimulating (Wordsound, 2000), introduced Paul to the public sphere as a heavy lyricist, rhyming about school, politics, and comedic sexcapades. The 6-track EP contained gems such as "My Dandy Voice makes even the most anti-choice grannies' panties moist." "The Joy of Your World" ends with the protagonist unwrapping a gold coin condom only to find chocolate Chanukah gelt. Until it became too expensive, Paul threw the gold foil mixture of coins and condoms into the audience. Rolling Stone gave it four stars and named it one of their Best Albums of Year. Wordsound allowed him to parody the original album cover for its second pressing.