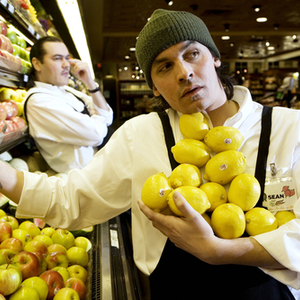 There are, at least, four artists known as Atmosphere: 1) An American alternative rap band. 2) A Polish rock band. 3) An Italian disco group. 4) A Vietnamese metal band. 1) The Minnesota underground hip-hop group was formed around 1994. At its creation, the group was called "Urban Atmosphere". Unlike many hip hop groups, Atmosphere provides its own live instrumentation, usually consisting of bass guitar and drums.

1) The Minnesota underground hip-hop group was formed around 1994. At its creation, the group was called "Urban Atmosphere". Unlike many hip hop groups, Atmosphere provides its own live instrumentation, usually consisting of bass guitar and drums. Atmosphere originally consisted of Spawn (MC), Ant (producer) and Slug (DJ, at the time). After Spawn left the group (now rapping under the name Rek The Heavyweight) the line up was set, with Slug, ANT and a rotating DJ. Currently the group consists of rapper Slug (Sean Daley), producer Ant (Anthony Davis) and Touring DJ Mr. Dibbs (Brad Forste). Slug is also one of the co-founders of a Minneapolis hip hop label called Rhymesayers Entertainment. The band has had hit singles on a variety of Billboard charts in the United States: 2002's "Modern Man's Hustle" went to #18 on the Billboard Hot Rap Tracks chart and 2008's "You" hit #38 on the Billboard Hot Modern Rock Tracks chart.

2) A Polish rock group, established in 1993 in Leszno, Poland, with Marcin Rozynek as a vocalist. In 1994 the group appeared at Mokotowska Jesie? Muzyczna, where they were runners-up just behind Myslovitz. Two years later they won competition Marlboro Rock In. In 1997, Atmosphere released their self-titled debut album, Atmosphere, and in 1999 released Europa Naftowa. Atmosphere was awarded the Album debut of the year 1997 by magazine Tylko Rock and was nominated for the award Fryderyk in 1998 in the category Debut of the Year. In 1998, Atmosphere appeared at the National Festival of Polish Song in Opole with song Niewielki skrawek ziemi. Disbanded after Marcin Rozynek departure for a solo career. However, Atmosphere regrouped recently with a new line-up and is recording a new album.

4) A thrash metal band of the same name from Vietnam who have released two demo's.

The Day Before Halloween