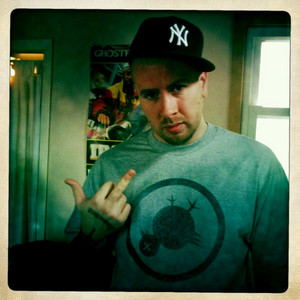 There are 5 artists called Apathy: an American hip-hop artist, a doom/death metal band from Sweden, an American Hardcore band from Maryland (active from the mid 90's through 2001), an American grunge band from Wisconsin, and a Punk Band from Omaha Nebraska (active in the 1980s). 1.Apathy is a hip-hop artist from the USA. The Connecticut based emcee, who spent most of his life bouncing from place to place, first discovered hip-hop through Melle Mel's verses on Chaka Kahn's "Feel For You", writing his own lyrics to match the track.

1.Apathy is a hip-hop artist from the USA. The Connecticut based emcee, who spent most of his life bouncing from place to place, first discovered hip-hop through Melle Mel's verses on Chaka Kahn's "Feel For You", writing his own lyrics to match the track. By 1991, Ap started "taking this rap shit seriously", and a few short years later, Ap made his debut on wax, appearing on three tracks on Jedi Mind Tricks critically acclaimed underground debut "The Psycho Social" LP in 1996.

After The Demigodz crew released their debut EP, "The Godz Must Be Crazy", the major label bidding war began. Said Apathy, "Interscope was interested in Celph and I as a group. Jason McGuire and Jimmy Iovine flew us out to LA, rented us a vehicle, put us up in a bangin' hotel on Sunset Blvd, gave us company cell phones and shit... it was dope." But Apathy wasn't quick to sign the dotted line with the big "I", as other labels also had offers on the table. "While we were out there, we met up with Mike Caren from Atlantic. Interscope was dope, but they have a lot on their plate and probably wouldn't have given us the attention we needed. Mike Caren set up a meeting with Craig Kalman (ceo of Atlantic) and Craig was interested. Mike really didn't feel Celph and I as a group for whatever reason, and wanted to sign me as a solo artist." While the signing to Atlantic as a solo artist may seemed like a bum deal for Celph, Ap assures it only strengthened the Demigodz' relationship. "I know people would probably assume that's wack, but Celph and I are completely fine with it. We're like Redman and Method man, or Ghost and Rae, we're partners no matter what. So Celph was worked into the contract for guaranteed guest appearances and production. Celph is happy, cuz he didn't really wanna make that jump yet... but we do shit regardless, so its a perfect scenario," said Ap.

What can we expect from the major label debut? "I have a few different ideas for what the album will be called, but I haven't decided yet, so I'm gonna keep that under wraps," says Apathy. As far as production, I've been workin' with a lot of different producers, but I have no idea who's actual shit we're gonna use. So far the only definite production is from Celph, Chum The Skrilla Guerilla, DJ Khalil (Self Scientific) and 8th Wundah. I've been workin with Alchemist, Pete Rock, Megahurtz (the producer), Rick Rock, EZ Elpee, and Carlos 6th July Brody. If I don't get a Primo beat... I quit. As far as guest appearances, the only definite ones right now are me, Celph, Lord Digga, and Bambue. But, I do intend on getting some other people on there. I want to get Pharoahe Monch, Ghostface,..... a lot of other people. But everything is still in its beginning stages."


2.Apathy is a doom/death metal band from Norrk?ping, Sweden, being the creation of multi-instrumentalist Viktor Jonas. The band started as a side-project in 2003 when Viktor was playing the drums in a black metal band called Nattstrype. The band disbanded later that year and gave Viktor time to focus on Apathy.

After a couple months of hiatus, Viktor began working on new songs for an upcoming release. In late summer of 2007 he was approached by Serge Farinas (Simbelmyne, Amidst The Withering) and collaborations were initiated. Serge added additional rhythm, lead and acoustic guitars to the songs.

As on the first EP, Sebastian Gustafsson and Vidar Wetterhall were once again hired for bass guitar and vocal duties. Another guest musician, Johan Dyyk (Sabachthani), contributed with guitar solos for two of the songs.

3. Apathy was a Hardcore band from Baltimore, MD active from 1994 through 2001. They released three albums, 1997's self titled EP, 1999's full length entitled "What the Dead See Through the Eyes of the Living" both on Gain Ground Records (germany), and in 2001 a self released two song E.P. that was only available from the band directly. Their original line up was vocalist Rob Ingram, guitarists Ben Swan and Adam Brown, bassist Jimmy Hickey and drummer Ian Taylor. Later Nater Kane replaced Taylor on drums. Early tours were with bands such as Next Step Up, Torn Apart, Dying Fetus, Compression, Brother's Keeper, Shutdown and 25 ta Life.

4. Apathy was a Wisconsin-based grunge band from the early 00s led by Nirvana devotee Luke Helder. Helder is best known as the Midwestern Pipe Bomber who, in Spring of 2002 set off a large number of bombs across the Central United States in the shape of a smiley face.

5. Apathy was a Punk Band from Omaha, Nebraska, who put out an LP called "Out the Window" in 1988 (Fat Bat Records). Apathy went on many regional tours, and one national one. It was the latter that proved to be the downfall, as there was a major falling out on the national tour between two members and they never played together again, until a Punk Re-Union show in Omaha in 2008.

Where The River Meets The Sea

Weekend At The Cape (EP)