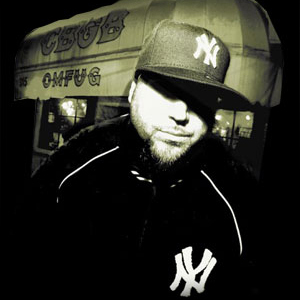 William Braunstein (born 1972), better known as ILL BILL, is a political minded MC from Brooklyn, New York. He is also a producer, and the man behind Uncle Howie Records. In 2003, Ill Bill declared himself to be the future. The truth is, Ill Bill is the past, the present AND the future. The cult leader is most definitely back. After several years of blood, sweat and no tears, the prophecy has been fulfilled with the breakout album The Hour of Reprisal.

In 2003, Ill Bill declared himself to be the future. The truth is, Ill Bill is the past, the present AND the future. The cult leader is most definitely back. After several years of blood, sweat and no tears, the prophecy has been fulfilled with the breakout album The Hour of Reprisal. Clocking in at exactly 60 minutes and accompanied by a DVD of Ill Bill's wild night at punk rock mecca CBGB, Bill's latest effort is the surgically polished sum of his career?so far. An Ill Bill verse has never been an aimless journey through 16 bars, but rather a threatening configuration of world view, conspiracy theories, street corner politics and the most potent of all, real-life experiences that carry the listener through a perspective that stands unique; challenging anyone with half a brain to relate.

The former Non Phixion standout and one of the organizers behind La Coka Nostra is aggressively pushing the envelope, representing hip-hop in a manner unlike any other. Whether holding it down alongside iconic MCs such as Raekwon the Chef and B-Real, or masterminding stellar collaborations with the likes of the legendary Bad Brains and heavy metal kingpins Killswitch Engage, Bill confidently swaggers the line between genres with fellow visionaries DJ Premier, DJ Muggs, T-Ray, DJ Lethal and others behind the boards. Also, for the first time, a bulk of the production has been propelled by Bill himself. Additionally, in order to bring these sonic textures to life, longtime Wu-Tang Clan mix engineer Carlos Bess brought his state-of-the-art boom, ensuring that the menacing soundscapes would be as sharp as the undeniably crucial lyrics.

Above a tightly wound blend of inspirations, The Hour of Reprisal builds upon Ill Bill's iron reputation for touching on serious issues ? social as well as personal. "My Uncle" addresses one of the pillars of Bill's life, his Uncle Howie and his seemingly endless battle with addiction. Playing off of Nas' "The Unauthorized Biography of Rakim" from several years ago, Bill flips the concept to toast his favorite heavy metal outfit, Slayer, so as to pay tribute to his heroes from another voice of struggle ? Metal. Topics such as the war in Iraq, the unsettling and disturbing subject of racism, the senseless shootings at Virginia Tech University, the state execution of Stanley "Tookie" Williams and countless others surface, minus any air of exploitation, but with a slash of brutal awareness of challenging times. Bill even manages to deliver a spiritual dedication to his first daughter, with the assistance of seminal punks HR and Darryl Jenifer (Bad Brains).

The self-proclaimed "2011 Melle-Mel" is near the edge. After many years of challenging the hip-hop establishment, backed by a passionate legion of "goons" worldwide, Ill Bill has a fresh pair of kicks laced up and is prepared for war. Now with a family in tow, this abrasive, hard-as-nails MC/Producer steps to the unsuspecting planet with a meticulously-crafted album that will fuck you up?in the best possible way!

For more info go to < www.myspace.com/illbill >

Howie Made Me Do It 3

The Hour Of Reprisal

Ill Bill Is The Future

Howie Made Me Do It