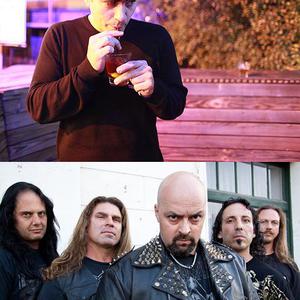 There is more than one artist with this name: 1. The Rapper: Cage Kennylz (born Christian Palko), commonly known as Cage, is an underground rapper based in New York City, United States. Cage's life has gone from watching his father shoot heroin, to addiction and violence and mental institutions to cutting an album for Columbia Records and being a rising star in the heyday of the NYC independent rap scene, to the final culmination and personal triumph that his most current release Hell's Winter has become.

Cage's life has gone from watching his father shoot heroin, to addiction and violence and mental institutions to cutting an album for Columbia Records and being a rising star in the heyday of the NYC independent rap scene, to the final culmination and personal triumph that his most current release Hell's Winter has become. It's a brand new record from someone who has been through more extreme circumstances than most people could ever imagine, and has come out triumphant and a better person because of it, and whose artistic vision now reflects this.

18 years old, fresh out of the lodge, Cage decided to pursue his the talent he honed while in hell and try to become a professional rapper. He made a demo, got a manager and was introduced to Pete Nice of 3rd Bass fame. Pete featured Cage on his solo effort "Dust to Dust" on the song "Rich Bring 'Em Back" in 1993. This was his first appearance on a rap record.

Through Pete Nice Cage met fledgling radio personality Bobbito Garcia who had just started his soon to be legendary late night mix show with DJ Stretch Armstrong. He was invited up to the show several time, earning a rep in the emerging underground NY scene as a savage and raw new MC with an original style based on his tortured life and demented imagery

Through his connection with that show, he met and formed a strong friendship with the KMD (whose front man Zev Love X would eventually be known as MF DOOM) and formed a very strong friendship with the late great Subroc. Cage was the last person to see Subroc alive before he was killed. He also became associated with and close to: Kurious Jorge, K-Solo, Godfather Don, Artifacts, Pharoah Monch, El-P (who actually worked with Cage briefly in 1994 on a 3 song demo now lost to the world), the Juggaknots and many more.

Bobbito and Pete Nice started a label through Columbia Records called Hoppoh and were on the verge of singing Cage as one of their first releases. At this time Cage was heavily abusing drugs and every time he got into the studio he was too high to record anything that Columbia thought was worthy of a major label release.

In 1997, Cage's friend and mentor Bobbito Garcia started his own independent label Fondle 'Em Records, and offered cage a twelve inch deal. Refocused and determined to get it right this time, Cage penned the single Agent Orange b/w Radiohead. The single would go on to be one of the landmark records of the golden era of NYC underground/independent rap music and propelled Cage into cult star status.

After a few more singles with Fondle 'Em, Cage met and became friends with Philly to New York transplant rap group The High And the Mighty. He formed a group with them called the Smut Peddlers, and Rawkus (who were riding high on albums by Company Flow and Mos Def, to name a few) offered them a full length album deal through Eastern Conference's imprint, Eastern Conference. The record sold over 50 thousand copies and solidified Cage's status as a rising rap star in the independent scene.

Cage went on to do more records with Eastern Conference including his first solo record Movies for the Blind. The record was the realization of the very character he became through his tortured early years, relying on raw, savage, often cruel, misogynistic, gritty and rebellious attitudes he had formed through his earlier years. The record struck a chord, selling 15 thousand copies in just 2 weeks, and his legion of dedicated fans grew ever bigger, attracted to his visceral and dangerous persona and music. He traveled the world several times over in support of the record and became a major draw in the independent show circuit.

Restless with his artistic direction and feeling trapped by a persona created out of his troubled youth, he found himself at a crossroads. He felt as though he was squandering his writing abilities and catering to music with content that only scratched the surface of what he was about. He no longer wanted to project crazy for the sake of crazy and grew tired of showing the results of his past and how they reflected on his personality. Instead, he wanted to explain why he was the way he was and wanted to make a record that he could play for his daughter someday; a record that reflected the man he was now while at the same time finally shedding light on the source of his rage, pain and rebellion. It was at this point that he and El-p started to seriously talk about making an album that would truly realize his desire to take his art to another level. They cautiously talked and imagined this transformation for over a year, culminating with his signing with Definitive Jux records. Cage worked to to bring these ideas to fruition, and the result is a cathartic and radical statement of a tortured boy turned man. A detailed, imaginative and often disturbing look into the dark territory that Cage had so closely guarded from the fans that loved him.

Cage appeared at the end of the Head Automatica album Decadence on the track 'I Shot William H. Macy' - lead singer Daryl Palumbo appeared on the RJD2 produced track Shoot Frank, as well as his band being referenced throughout the album (notably on Scenester, with Cage urging the listener to "slip it in your Head Automatica folder"). Head Automatica also wrote a song called K-Horse about Cage on their new album Popaganda.

Actor Shia LaBeouf star of Transformers (July 2007) will be playing Cage in an upcoming movie about his life.

2. The Heavy Metal Band: CAGE formed in San Diego, California, in 1992. Although a full-length cd was recorded in 1995, it has still remained un-released. It wasn't until 1998 that Cage released their first full-length cd appropriately called "Unveiled".

They began writing for their follow up cd, which put them under tremendous pressure to avoid the sophomore jinx. Right before the 1999 DYNAMO Open Air festival, Cage added drummer Mikey Niel to the band to increase the power and speed of the group. The band had matured and was a close-knit group after 8 years of big performances and recording together.

Upon their return from Europe, they were signed to their first domestic deal. A new Los Angeles, California based upstart metal company called World War III Records wanted to release Astrology in the US and Canada.

They have a new album, Hell Destroyer, out on Destroy All Records in 2007, which is even more powerful than Darker Than Black. On the European releases, there is a bonus track, "King Diamond", which is an homage to King Diamond.

Recently, Mike Nielsen had been dropped from the lineup, for unknown reasons, but has been replaced by Norm Leggio of Psychotic Waltz.

The Best & Worst Of Cage

Movies For The Blind