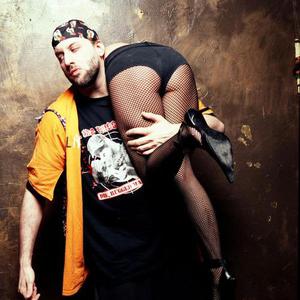 R.A. the Rugged Man, real name R.A. Thorburn, is a rapper from Stony Brook, Long Island. He began his music career at age 12. At 18, he signed to Jive Records. R.A.'s legend, perpetuated by the P.R. biographies at his various labels, say he was dropped due to violent and disgusting behavior, but in interviews he disputes many of the more extreme stories told about him, adding that Jive just didn't know how to break new artists at the time.

Since then, he has worked with Mobb Deep, Smut Peddlers and Notorious B.I.G, as well as producers Erick Sermon, Trackmasters, DJ Quik, Alchemist, J-Zone, RZA, and Ayatollah (Lamont Dorrell). He was featured on all three of Rawkus's Soundbombing albums, as well as the platinum-selling WWF Aggression album. In 2004 he released his first single "LESSONS" ( cuts by Dj U-vex) to follow with the release of his long awaited debut album "Die, Rugged Man, Die" which received good reviews and was met with little commercial success.

Coming from a broken Long Island home, R.A.'s father was a gun toting Vietnam veteran/mental patient affected by Agent Orange. His family was forever changed by the potent chemical ? his brother Maxx was born handicapped and blind, eventually dying at the age of 10, while his sister Dee Ann couldn't walk or speak.

In addition to his hip-hop notoriety, R.A. writes a monthly movie column for Mass Appeal magazine, is a contributor to The Ego Trip Book of Rap Lists (St. Martin's Press) and Ego Trip's Big Book of Racism (Harper Collins), and has written numerous articles for other magazines including Vibe, King, and Source. Mr. Rugged has also recently signed a book deal that will explore his maniacal love of boxing to be co-authored with Max Boxing's Doug Fischer and scheduled for publication in spring '06 from Testify / Powerhouse Books.

A rabid horror-film fan, R.A. has written three screenplays with cult-film director Frank Henenlotter -- "Sick in the Head," "Love is Hell," and "Twisted Sex" -- the latter of which is scheduled for production this year with R.A. as co-producer.

All My Heroes Are Dead