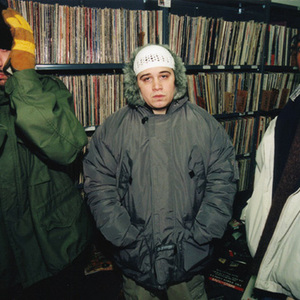 Jedi Mind Tricks (JMT) is a hip hop group formed in 1996 with two members from Philadelphia, Pennsylvania and one from Camden, New Jersey. The group was founded by two high school friends rapper Vinnie Paz (Vincenzo Luvineri) and producer / DJ Stoupe the Enemy of Mankind (Kevin Baldwin). In 1999 the New Jersey rapper Jus Allah (James Bostick) joined the group to record the 2nd studio album by JMT, Violent by Design but left shortly after for reasons that remain unexplained.

The track "The Rebuilding" (2006) marked his unofficial return to JMT since the split, but made a full fledged return aside Vinnie Paz for the 6th studio album, A History of Violence (2008).

JMT officially debuted with the Amber Probe EP in 1996. The B-side of that EP was also included in their first LP, The Psycho-Social LP, which was released a year later. On this album Vinnie Paz called himself "Ikon the Verbal Hologram".

The Psycho-Social LP was a concept album containing themes of conspiracy theories and ancient Middle-Eastern mythology. It also featured the recording debut of fellow Philadelphia rap-group Lost Children of Babylon and Connecticut's Apathy on multiple songs. However, the Lost Children of Babylon soon parted ways with JMT, and in a 2001 interview member Cosmic Crusader cited that while Vinnie Paz had assured them that his cause was all for spiritual hip hop, he soon saw "that Vinnie Paz was not really spiritual at all, but only interested in tapping that fan base." In a later interview, member Rasul Allah stated that the group and JMT are on good terms.

Prior to the release of their first LP, Vinnie Paz had conceived the idea of forming a rotating, collaborative super-group of underground East Coast artists called the Army of the Pharaohs (AotP). 1998 saw the first result of these efforts in The Five Perfect Exertions EP. The release featured Virtuoso, 7L & Esoteric, Chief Kamachi and Bahamadia as well as Vinnie Paz himself. The EP was later remixed for JMT's next LP, Violent by Design (2000), albeit without Chief Kamachi's verse.
The LP, originally titled Nyugha Reincarnation of the Hologramic Christ, became seen as the group's best work. Vinnie Paz became noticeably more aggressive, abandoning his cosmic, paranoid rhyme style from The Psycho-Social CD for more violent lyrics. The LP also introduced Jus Allah, a founding member of JMT who had left for college but dropped out a short while after. A self-proclaimed five-percenter, Jus was present on every non-AotP track on Violent by Design as JMT's unofficial third member. Most of the lyrics in Violent By Design show Allah and Paz describing exaggerated ways of killing people as well as their metaphorical superhuman powers. Typically, they do this by combining themes of hardcore/gangsta rap with mythological or fantasy imagery. For example, on Genghis Kahn featuring Tragedy Khadafi, Allah rhymes: With a staff and white robe I still hold metal / Disciples who walk on glass and rose petals.
The list of guest artists on this album was also their longest, including Mr. Lif, Planetary of OuterSpace, Louis Logic, Diamondback, Philip King Rappah,Coffe Gangsta Child L-Fudge, B.A. Barakus, J-Treds, Killa Sha, C-Baz and Tragedy Khadafi, plus a couple of odd phone-call interludes by Mr. Len.
During the course of Violent by Design's 1999-2000 recording period, Paz changed his alias to Vinnie Paz, inspired by the boxer of the same name. The reason for this has been reported to be the result of a short-lived rivalry instigated by fellow Philly underground rapper iCON the Mic King. Vinnie Paz decided to settle on his new moniker in order to prevent any further confusion. It was also around this time that he formally declared himself to be a follower of Islam, alluding to this fact several times on record.

In late 2001, JMT was made an offer by Babygrande Records founder Chuck Wilson to sign a deal. Jus Allah's uncertainty caused him to leave the group on good terms. Stoupe and Vinnie Paz closed their homegrown Superegular label and migrated to Babygrande. Before his White Nightmare EP on Virtuoso's "Omnipotent Records" label, Jus was somewhat isolated from the entire Philadelphia underground scene; the two sides wouldn't talk to each other for over three years. Virtuoso was also estranged from JMT and AoTP for his support of Jus, among other reasons.
Mid-2003 saw the release of JMT's third LP, Visions of Gandhi. In an interview, Vinnie Paz said the title was inspired by Foxy Brown's verse in Nas's song "Affirmative Action", and expresses the need for a prominent figure of non-violent social change such as Gandhi in a post-9/11 world.
Stoupe, now supplied with a professional studio in New York, also expanded his variety of production, incorporating grand orchestral samples and a stronger Latino feel. In response, some Template:Weazel longtime fans felt let down by Vinnie Paz's lyricism and delivery, as well as the abundance of slick, upbeat loops adopted by Stoupe. Nevertheless, the album helped expand the group's audience as its popularity and commercial success continued to grow.

Legacy of Blood and Servants in Heaven, Kings in Hell

A little over a year later, JMT continued their creative streak with Legacy of Blood, this time intentionally keeping guest artists to a minimum. Carrying with them their lessons from Gandhi, Stoupe and Vinnie tried to strike a balance between the past two albums. Vinnie Paz also added a more personal aspect to his lyrics, most notably in the last song "Before the Great Collapse".
In February, 2005, Babygrande officially announced that Jus Allah had signed on to the label after reconciling with his former partners. Babygrande released his long-awaited debut LP, All Fates Have Changed, in May of that year. However, after a dispute with label CEO Chuck Wilson soon after the album's release, Jus left Babygrande and denied any new association with JMT.
In March, 2006, a reunited Army of the Pharaohs released The Torture Papers LP. The crew now consisted of Vinnie Paz, Chief Kamachi, 7L & Esoteric, Apathy, Celph Titled, Planetary & Crypt the Warchild of Outerspace, King Syze, Faez One, Reef the Lost Cauze, and new Jedi Mind Tricks hype-man Des Devious. This time, however, Virtuoso and Bahamadia were not featured and are no longer associated with the Army.
The fifth Jedi Mind Tricks album, titled Servants in Heaven, Kings in Hell, was released on September 19th, 2006. The release coincided with the beginning of the album's supportive tour, which kicked off in New York City's Time Square. The album was widely acclaimed, unlike the group's two previous albums, which both received mixed reviews. A large part of the acclaim was due to the album's lyrical and musical diversity, both missing from their previous efforts. The album featured the single "Heavy Metal Kings" with Ill Bill, the Shara Worden-assisted "Razorblade Salvation", and the storytelling track "Uncommon Valor: A Vietnam Story" with R.A. The Rugged Man. A day after the release of the album, Vinnie Paz of Jedi Mind Tricks did an interview with The Breakdown, a show on ItsHipHop.tv where he discussed the album and his thoughts on Jus Allah.
In early 2006, rumors spread that the group had reunited with estranged member Jus Allah, and that he would be featured on Servants in Heaven, Kings in Hell, but no collaboration appeared. However, on September 20, 2006 a newly-recorded Jedi Mind Tricks/Jus Allah collaboration titled "The Rebuilding" appeared online. Jus is also planning to release his second album, The Colossus, in the summer of 2007. In a January 2007 interview Paz stated that Jus will be featured on the group's upcoming sixth album, titled A History of Violence. Jus Allah, Doap Nixon and Demoz were added to the AotP roster in 2007, and will contribute verses to the group's second studio album Ritual of Battle, scheduled for release on September 25, 2007. Also, in summer 2008, Jedi Mind Tricks' Label, Babygrande, will be releasing a JMT DVD. "With a 12+ year career under their belt and a continually growing rabid fan base, the history of Jedi Mind Tricks has never been officially documented?until now. This summer (2008), ?Divine Fire: The Story of Jedi Mind Tricks DVD,? promises an insightful excursion into the roots of an underground empire." This is from Babygrande's Newsletter.

In an interview conducted in September 2007 on the Art of Rhyme website, Jus Allah announced that he has rejoined Jedi Mind Tricks. In the interview he states that "I'm back in the group [and that] I'm focused on... putting out the next Jedi Mind Tricks album... a History of Violence." In addition, he says that he has rejoined Babygrande and that the entire "All Fates Have Changed" fiasco has been put in the past and was in large part a misunderstanding. Babygrande will also be releasing Jus Allah's next solo album, The Colossus.

The Funeral And The Raven

The Bridge And The Abyss

The Thief And The Fallen

A History Of Violence

Army of the Pharaohs: Ritual of Battle

Servants In Heaven, Kings In Hell

Army of the Pharaohs: The Torture Papers