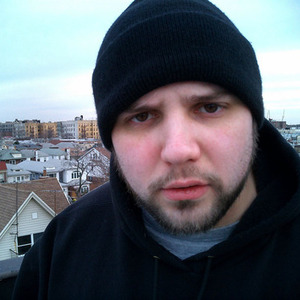 Ron Raphael Braunstein (born June 7, 1976), better known under his stage-name Necro, Is a Jewish-American rapper, and director from Brooklyn, New York. Necro is known in the hip hop community for his dark beats and exceptionally explicit lyrics. He has rapped about murder by torture, Charles Manson, and devil worship. Necro is regarded as an influential star of death rap. Along with this, he directs movies and is owner of Psycho+Logical-Records.

Necro was born in Brooklyn, New York and grew up in the Glenwood Housing Projects, where he lived for eight years from about 6 years old to age 14, when he moved to Canarsie. He is the son of two Israeli expatriates and of Israeli and Romanian ethnicity. Necro's father was a Romanian born Israeli combat soldier and his mother an Orthodox baalat teshuva.

He began his musical career at 11, playing guitar in a thrash / death metal band named Injustice. But in due time, he made a transition from metal to hip-hop. In 1988, he started rapping after being influenced by his older brother, rapper Ill Bill. Necro derived his stage-name from the Slayer song "Necrophobic". Before that he called himself "Mad Mooney", which was a character from a Clive Barker book. He made his first demo in about 1990 and won a demo battle contest on the Stretch Armstrong and Bobbito show on WKCR 89.9FM. In about 1993 Necro started rapping full time and made a demo called "Do The Charles Manson". In '95 he proceeded to rap on the Wildman Steve and DJ Riz show WBAU 90.3FM.

The Pre-Fix For Death