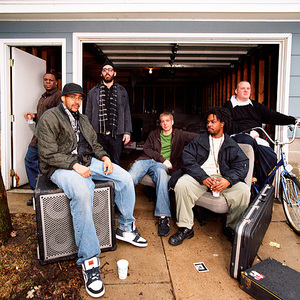 ?We started out playing in high school in St. Paul to a crowd of hip-hop kids, thug kids, nerd kids and honor students,? Heiruspecs bassist Twinkie Jiggles says. ?Eventually, the school paper wrote about us and said we were the best band out of Central High since Mint Condition. Then we played our first gig in Minneapolis when I was 15 and my dad showed up and smelled weed.? Not many bands lock into their sound in high school or manage to hang together for seven years, but Heiruspecs has and now the young 20-somethings are seasoned vets.

Not many bands lock into their sound in high school or manage to hang together for seven years, but Heiruspecs has and now the young 20-somethings are seasoned vets. With more than 100,000 revolutions on the band's odometer from a touring schedule that keeps them on the road 150 days a year, Heiruspecs has steadily broken down preconceived notions of live hip-hop by refusing to regurgitate the same old sounds you've heard before, and knock you upside the head with their impressive array of funk, soul and hard-hitting beats. And the band doesn't cop samples to get to where they want to take you, instead opting to deliver it all live, all original.

All this has culminated in the band's latest, A Tiger Dancing (Razor & Tie) released September 28, 2004. With lead MC Felix's fast-lane but steady and assured handle on the mic and the powerful rhythmic backing of the band, Heiruspecs has brought live hip-hop into a new arena. From the countdown of a daily routine that makes up ?5ves? to the mid-song break between old-school and new school in the title track, the soul strains of ?Heartsprings,? and the frantic anthem of ?Fist,? Heiruspecs cast a net that encompasses everything from The Roots and DJ Shadow to Run D.M.C. and Digable Planets.

?We're influenced by sampler-based production, old-school rhyming and real life,? says lead MC Felix. ?But we do everything live, nothing is sampled and we like to keep it song-oriented, to give equal space to the lyrics and the music.?

?When we started touring, a lot of people seemed surprised there are bands who play this kind of music live,? Felix adds. ?They're even more puzzled when we tell them we're from St. Paul, because no one has ever heard of St. Paul. Ever. That's why we tell most people we're from Minneapolis.?

As part of the burgeoning Midwestern hip-hop scene, Heiruspecs first made inroads with their self-released 2002 album, Small Steps, which earned them critical praise in national and regional outlets (?Exceptional ... the rhythm that rocks the spot? - URB), and set them off on their never-ending touring schedule. In their down time, Heiruspecs has been tapped to perform as the backing band for such acts as Atmosphere, Oddjobs, Aesop Rock, Sage Francis and others, allowing the band to cement themselves as one of the premiere live hip-hop bands in the nation.

?The Twin Cities is a very nurturing scene,? Twinkie says. ?There's a lot of clubs, a lot of musicians, and a lot of open minds here. It's allowed us to be ourselves while also being able to develop our live act and take it out of town to the rest of the country.?