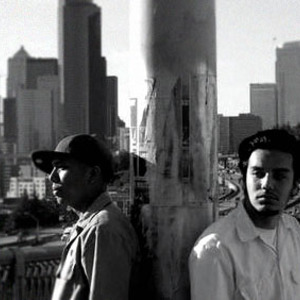 In homage to hip-hop's empirical formula - one DJ & one MC, and duos such as Pete Rock & CL Smooth, Guru and Premier, the Blue Scholars embody the chemistry that made these groups so consistent not only on wax, but live on stage as well. What results is the blend of poetic, raw vocal delivery with melodic boom-bap and turntablism, painted with politics and preservation. Residing where the hustle and the struggle coincide, Blue Scholars craft the soundtrack for everyday folks with everyday problems seeking everyday release.

After dropping one full-length album (Blue Scholars LP, 2005) and an EP (The Long March, 2005) the Blue Scholars have emerged as the latest in a long line of torchbearers for Seattle and greater Pacific Northwest hip-hop scene. The duo formed in early [yearformed]2002[/YEARFORMED] after ciphers and sessions in a makeshift attic-bedroom-studio in Seattle's University District, where emcee Geologic and DJ/producer Sabzi came from vastly different musical approaches to collide. One a distinguished battle emcee and poet, the other a former punk/ska drummer and jazz-trained pianist, the duo's backgrounds laid the foundation for a versatile combination of beats and rhymes at once political and personal.

Since 2002, the duo has become renowned live show veterans, rocking nearly 200 shows with the likes of De La Soul, Immortal Technique, The Coup, Zion I, One Be Lo, Soul Position, Slick Rick, and Spearhead. The mass appeal of their live show has brought them to many diverse venues - from labor organizing conferences and youth-run community center shows to playing the main stage at Sasquatch! (2006) and Bumbershoot (2006).