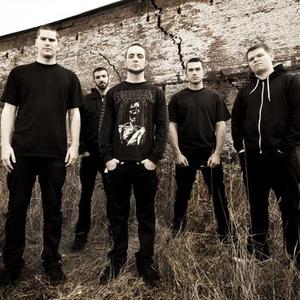 I Declare War is a deathcore band from Seattle, Washington currently signed with Artery Recordings and have four full-length albums released and even a Christmas special EP. Jamie Hanks- Vocals Christopher Fugate - Guitar Evan Hughes - Guitar Ryan Cox - Drums Former members: Brent Eaton:Bass Zack Ring: Bass Randy Carpenter:Drums Jake Paulson:Guitars Jonathan Huber:Vocals For Seattle's I Declare War, one of the new heavyweights in the deathcore scene today, there are conflicting stories as to where the band's name actually originated from.

For Seattle's I Declare War, one of the new heavyweights in the deathcore scene today, there are conflicting stories as to where the band's name actually originated from. All five members can agree that hip hop was the influence, either based on the Jay-Z tour or the Pace Won album, both of which bear the same name. The fact that the deathcore band's name is inspired by hip hop is not ironic at all, as I Declare War will concur that their diverse musical influences help keep their sound unique and fresh.

After a few lineup changes while growing the band, they eventually evolved into their current lineup as members were introduced to each other through the local Seattle music scene. Unfortunatly, the band had to part ways with former vocalist, Jon Huber in late 2011 due to the fact that he wanted to incorporate Grindcore elements to their music. It was a mutual seperation in which Jon went on to join Pathology as their vocalist. They then found Jamie Hanks and he became the new I Declare War vocalist. As other bands began to disperse, the I Declare War lineup was solidified and grew stronger with each lineup addition. Guitarist Chris Fugate had the ultimate experience, beginning as a fan of the band who was eventually asked to fill in on a brief tour, and later asked to permanently join the band.

While on tour in 2007, the band crossed paths with well-known death metal band Whitechapel and formed not only a mutual respect amongst each other, but a lasting friendship. Two years later, Whitechapel's Alex Wade approached I Declare War to join The Artery Foundation for management and become part of the yet-to-be-launched Artery Recordings roster. ?Being signed to Artery Recordings was the best thing that could have happened to us. They've been great to us along with everyone at Razor & Tie, and I'm extremely excited for our future,? said bassist Brent Eaton. ?We feel really connected and close to everyone there,? agreed guitarist Evan Hughes.

As heavy as I Declare War's sound is, their message is just as poignant and serious. ?Our lyrics are based on a lot of what we think is corrupt in the world today ? government, religion, and the self-inflicted downfall of humanity,? stated Hughes. ?We have elements of a lot of different styles but try to stray from sticking to a formula and to keep things interesting by not writing the same song 11 times.?

Touring is fundamental to the growth and development of I Declare War, and has proven to be key to their success. The technical skill of the band is showcased when they find themselves in front of fans and fellow musicians. ?We feel the intensity just as much as someone watching, usually even more so,? Hughes explained. The band has already been touring nationwide for the past few years, but hopes to find themselves out of the country in the near future. ?I hope to be an international band. I would like to reach out to more fans and really push to get our music out there,? drummer Ryan Cox stated in summation.

A force to be reckoned with in the deathcore scene, I Declare War shows no signs of slowing down. As Alternative Press said, ?Five years in, they know exactly what they're doing and they do it without hesitation or mercy.?

Songs For The Sick

We Are Violent People By Nature