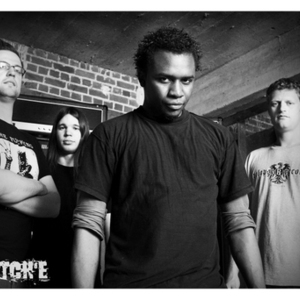 Leng Tch'e aka death by a thousand cuts, is an ancient Chinese torture ritual where the victim is being doped up and cut into bits. The victim doesn't feel any of this procedure until it is far too late and death is unavoidable. Leng Tch'e the band formed in early 2001, basing their own hybrid of grindcore on bands such as Regurgitate, Hemdale, Nasum and Blood Duster and mixing it all up with some stoner / rock / hardcore influences, the band baptized their own unique style, now known as 'razorgrind'.

Leng Tch'e the band formed in early 2001, basing their own hybrid of grindcore on bands such as Regurgitate, Hemdale, Nasum and Blood Duster and mixing it all up with some stoner / rock / hardcore influences, the band baptized their own unique style, now known as 'razorgrind'.

The quintet recorded two albums that have been released by The Spew Records in Europe. Noted underground label Willowtip issued the much talked about "Man Made Predator" in the USA in 2003.

Leng Tch'e then signed a deal with Relapse Records for their next album, "The Process Of Elimination" in 2005. The album was recorded at the legendary Belgian CCR studio and mixed by Tue Madsen (Gorefest, Moonspell, Mnemic, The Haunted) at Antfarm Studio. Hooks that sink into your brain accompanied some of the fastest and most extreme grind to emerge in years as Leng Tch'e proved that grindcore can continue to evolve, while staying true to its formative roots.

In 2006 the band released a split CD with French grindcore band Warscars on renowned European underground label Bones Brigade Records. This release served as a preview for the upcoming full length album and saw the band continuing to hone their craft by writing longer and more complex songs without losing touch of the extreme brutality they were known for.

Leng Tch'e dropped the hammer in 2007 with "Marasmus", their second full-length for Relapse Records. A heavier and more measured bludgeoning than previous records, "Marasmus" saw the band incorporating more pronounced death metal riffage to their pummeling grind assault. This time they went up to Sweden to have the album mixed by Fredrik Nordstr?m (At The Gates, In Flames, Arch Enemy, Soilwork). An absolute blinder of a full-length, "Marasmus" put Leng Tch'e squarely at the forefront of the modern extreme scene.

After years of revolving door lineups, the band finally settled into its current incarnation of Jan Hallaert on guitar, Tony Van den Eynde on drums, Serge Kasongo on vocals and Nicolas Malfeyt on bass guitar. With the creative nucleus stronger than ever, Leng Tch'e will release a split CD/7" with Canadian stalwarts Fuck The Facts on Power It Up Records. Meanwhile the songwriting continues for the upcoming full length album, due out in 2009.


This is the new sound of extreme - don't be left behind.

The Process Of Elimination

Death By A Thousand Cuts