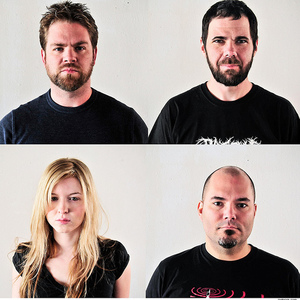 Agoraphobic Nosebleed (abbreviated as ANb) is a grindcore / cybergrind band formed in 1994 in Massachusetts, United States. Its line-up has changed often during the years, leaving the only permanent member Scott Hull (guitars, drum programming), also a guitarist in Pig Destroyer, though vocalist Jay Randall has been a constant member since their debut album, Honky Reduction. The current line-up also includes vocalist Katherine Katz of Salome, and Richard Johnson of Enemy Soil and Drugs of Faith, who also plays bass guitar.

The band is known for the brevity of its songs. Their album Altered States of America features 100 songs (including one hidden) in just under 22 minutes, with many songs of 5 seconds or less, and the longest song only 1:45. They played their first live set at the 2003 New England Metal and Hardcore Festival. As their appearance was unscheduled, Pig Destroyer cut their set short so they could play two songs and an intro.

In 2006, Hydra Head Records reissued Agoraphobic Nosebleed's 6" PCP Torpedo as a double disc set entitled PCP Torpedo/ANbRX. The first disc consisted of the 10-song, 6-minute original EP. The second disc is over an hour's worth of remixes of songs from PCP Torpedo by breakcore and noise music artists such as Xanopticon, James Plotkin, Merzbow, and Justin Broadrick.

In 2009, the band released the album Agorapocalypse on Relapse, available as a CD, LP, and longbox CD. The split 7" with Crom was released a month later on Regurgitated Semen Records. In 2010, the band released a split 7" with The Endless Blockade for Relapse Records and a split 5" with A.N.S. for Tankcrimes Records. A split CD/LP with Despise You was released on Relapse in 2011. The December 2011 issue of Decibel Magazine included a flexi disc titled Make A Joyful Noise.

Agoraphobic Nosebleed have many releases forthcoming, including a split 7" with Agents of Satan for Relapse, a 7" with Lack of Interest for Deep Six Records and a split 12" with Thrones for Hydrahead. Randall is currently working on Drum Machine Gun 2 as well as doing a collaborative 7" with Wadge and a collaborative 12" with Black Mayonnaise.