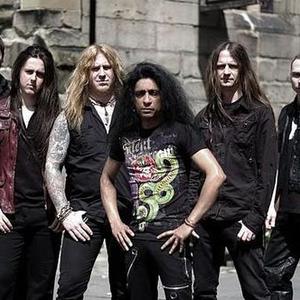 Wings Of Forever: Power Quest was conceived in 2001 by keyboardist Steve Williams, who had departed power metal band DragonHeart (now known as DragonForce). Steve Scott (of DragonHeart) was recruited for bass duties, along with Adam Bickers on guitar, and for the initial demo recordings both Sam Totman and ZP Theart (both of DragonHeart) lent their guitars and vocals to the process. In April 2002 vocalist Alessio Garavello was recruited to the Power Quest ranks.

He was accompanied by the guitarist of his band, Arthemis, Andrea Martongelli, who recorded a few guest solos on the first album - Wings of Forever. Following the album's release, he was recruited as a full-time member to replace Bickers who left to pursue a career as a doctor.

Neverworld:
In January 2003, Andre Bargmann was brought in as drummer for Power Quest. Bargmann left the band in July that year, following the release of Neverworld. His place was filled on the tour by Last Hours of Torment drummer Gavin Ward, and eventually on a more permanent basis by Francesco Tresca

Magic Never Dies:
In November 2004 the band headed back to Thin Ice studios to record songs for the new album. The band followed this with a Magic Never Dies Tour, where vocalist Alessio Garavello also took on a role as rhythm guitarist . In October, 2007 an official Napalm Records MySpace blog post announced that Power Quest have signed to Napalm Records.

Master of Illusion:
In 2007, Steve Williams announced that there would be five guest appearances on the forthcoming recordings. Bill Hudson (guitar in Cellador), Richard West (keyboards in Threshold), Jorn Viggo Lofstad (guitar in Pagan's Mind), Chris Neighbour (vocals in FourwayKill), and Bob Katsionis (keyboards in Firewind) all provided solos or guest vocals on the album.

Lineup Changes:
In June 2008 Cellador/Coldera guitarist Bill Hudson joined as joint lead guitarist. In January 2009, bassist Steve Scott decided to leave in roder to relocate to New Zealand. The band found a replacement bassist in Oliver Holzwarth (Blind Guardian). In April, Steve Williams announced the departure of Bill Hudson. In July, vocalist Alessio Garavello left the band after 7 years and 4 studio albums to pursue a different musical direction with his new band A New Tomorrow. In September it was announced that Andrea Martongelli and Francesco Tresca were also leaving Power Quest. Oliver Holzwarth also left due to commitments with Tarja Turunen. Steve Williams remained the only original member of the band.
Very quickly, a new line up was revealed: Pete Morton (Soliloquy/Threshold) on vocals, Andy Midgley (Liquid Sky) on guitar, Ben Randall (winner of 2008 'Most Promising Young Guitarist Award' at International Guitar Idol), Paul Finnie (The Maslin Incident/and also former Power Quest stage manager), and Rich Smith (Aphemia/Dark Funeral) on drums. The band ended 2009 touring the UK with the Michael Schenker Group. Following this tour, it was then announced that due to musical differences, both Pete Morten and Ben Randall had left the band.

Blood Alliance:
Chitral 'Chity' Somapala (Firewind/Civilisation One/Avalon) was announced as the new vocalist, and Welsh guitar virtuoso Gavin Owen came on board as a new guitarist. The new release under the new line-up has a heavier twin guitar attack and Chity's vocals bring a different style than the previous albums.