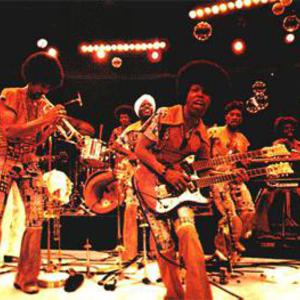 The Ohio Players are a funk and R&B band whose heyday was in the mid- to late 1970s. They formed in Dayton, Ohio in 1959 as the Ohio Untouchables, and initially included members Robert Ward (vocals/guitar), Marshall "Rock" Jones (bass), Clarence "Satch" Satchell (saxophone/guitar), Cornelius Johnson (drums), and Ralph "Pee Wee" Middlebrooks (trumpet/trombone). The Ohio Untouchables broke up in 1963, with Ward leaving for a solo career, but the core members of the group returned to Dayton and added Gary Webster (drums) and Leroy "Sugarfoot" Bonner (guitar) in 1964.

The group added two more singers, Bobby Lee Fears and Dutch Robinson, and became the house band for New York City-based Compass Records in 1967. They soon became one of the better known R&B bands of the 1970's. They inspired many artists including The Mighty Majors ("You Can Never Go Back"), which opened a show for them once on the road.

The group disbanded again in 1970. After again reforming with a line-up including Bonner, Satchell, Middlebrooks, Jones, Webster, trumpeter Bruce Napier, trombonist Marvin Pierce, and keyboardist Walter "Junie" Morrison, the Players had a minor hit on the Detroit-based Westbound label in 1971 with "Pain" which reached the Billboard R&B Top 40. Detroit vocalist Dale Allen shared co-lead vocals on some of the early Westbound material, although not credited on the albums "Pain" and "Pleasure".

The band's first big hit was "Funky Worm", which hit #1 on the Billboard R&B Charts and made the pop Top 15 in May 1973. The band signed with Mercury Records in 1974. By this time, their lineup had changed again, with keyboardist Billy Beck instead of Morrison and Jimmy "Diamond" Williams on drums instead of Webster. On later album releases, they added second guitarist/vocalist Clarence 'Chet' Willis and conga player Robert "Rumba" Jones to the lineup. Bonner sang lead vocals on most of the band's hits.

The band became widely known not only for their sound, which has been sampled and copied by countless R&B and hip-hop artists since, but for their sexually provocative album covers, including the cover of 1974's Ecstasy, which featured a man and a woman in a pose of arousal wearing chains and leather, and 1975's Honey, which featured a nude woman holding an overflowing jar of honey and dropping some into her mouth with a ladle.

There is an urban legend that has it that a scream on "Love Rollercoaster" that came during the break after the second verse was the sound of someone being murdered in the studio while the track was being recorded. It is widely believed to be the scream of a female model (the nude woman Ester Cordet featured on the image for the Honey album) after being stabbed with a knife by the band's manager. She was complaining that the honey and fibre glass she was sitting on reacted when mixed causing permanent damage to her legs during the image photography, ending her modelling career. She then approached the manager seeking compensation during the recording of "Love Rollercoaster" only to be stabbed and attacked.

The Ohio Players then left the scream in as a sick tribute.[1] The band did not discredit this rumor at the time, because, as one band member put it later, "that makes you sell more records." This is just an urban legend however, as are any other disturbing explanations, including a person murdered outside the recording studio (although recording studios are soundproof and the scream would not have been heard), a band member murdering his girlfriend or a cleaning woman in the recording studio, or a real scream taken from a 911 call or a Psychiatric ward.

Clarence Satchell died in January 1996 after he had a brain aneurysm. Ralph Middlebrooks died in November 1997.

The Red Hot Chili Peppers were one of the bands heavily influenced by the Ohio Players, covering "Love Rollercoaster" for the film Beavis and Butt-head Do America. In the UK, there was a chain of music and DVD stores named after one of their hit songs, "Fopp". "Fopp" was also covered by Soundgarden for an EP called Fopp.

Orgasm (The Very Best Of The Westbound Years) (Remastered 1998)