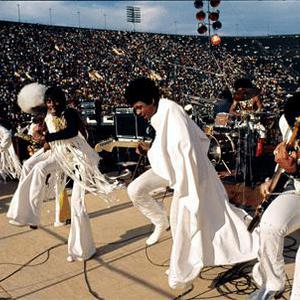 The Bar-Kays were a popular Memphis, Tennessee, soul, R&B, and funk group performing from 1966 that continues in some form to perform today, although with only one original member. They began as a favorite soul studio sessions group backing major artists at Stax Records, chosen in 1967 by Otis Redding to play as his touring backup band. On December 10, 1967, Redding, his manager, and band members Jimmy King (b.1949; guitar), Ronnie Caldwell (b. 1948; organ), Phalon Jones (b. 1949; saxophone), and Carl Cunningham (b.

Trumpeter Ben Cauley survived the crash and bassist James Alexander (who missed the flight due to returning a rental car) rebuilt the group.

The group backed dozens of major Stax artists on recordings afterwards, including on Isaac Hayes' Hot Buttered Soul album, and changed direction in the 1970s to have a successful funk music career. Lloyd Smith joined the Bar-Kays in 1973. They continued to score hits on R&B charts well into the 1980s and lately have incorporated contemporary rap & remix elements into their continuing career and have performed all over the world.

The Best Of Bar-Kays

The Best Of The Bar-Kays