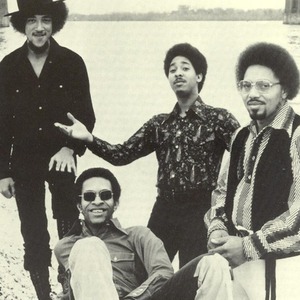 The Meters were a band that performed and recorded from the late 1960s until 1977. They were based in New Orleans. While the band never enjoyed huge popular success, it was nonetheless greatly admired by cognoscenti and is considered one of progenitors of funk in the 1970s. The Meters formed in 1965, with a line up of keyboardist and vocalist Art Neville, guitarist Leo Nocentelli, bassist George Porter Jr.

The Meters formed in 1965, with a line up of keyboardist and vocalist Art Neville, guitarist Leo Nocentelli, bassist George Porter Jr. and drummer Zigaboo Modeliste, and became the house band for Sansu Enterprises, an Allen Toussaint-owned label. In 1969, the Meters released "Sophisticated Cissy" and "Cissy Strut", both major R&B chart hits; "Look-Ka Py Py" and "Chicken Strut" were also hits the following year. After a label shift in 1972, the Meters had difficulty returning to the charts, though they played on many important records by Dr. John, Paul McCartney, King Biscuit Boy, LaBelle and Robert Palmer. The band broke up in 1977 after Toussaint claimed the rights to the name and they played as various incarnations of the Neville Brothers and with other bands. In 1989, The Meters reformed with the new official name, The Funky Meters, after an informal jam during the New Orleans Jazz & Heritage Festival.

Original drummer Ziggy Modeliste, who started out with the group as a 17-year-old, laid down some very influential rhythms. His beats have been sampled by numerous hip hop groups including Ice Cube, Run DMC, Nwa, A Tribe Called Quest, Beastie Boys, Queen Latifah, and EPMD. Modeliste relocated to Oakland, California, in the '80s where he teaches drumming, releases new music, and performs around the San Francisco Bay Area and the world with his band "Zigaboo Modeliste and The New Aahkesstra".

The Meters gained new-found notoriety in 2001, winning a Lifetime Achievement Award at the Jammys. Their music has been used in films and commercials, and in 2005 drum and guitar breaks from their 1970 version of "Oh, Calcutta!" (reinterpreted from the stage musical, and appearing on their "Look-Ka Py Py" album), were sampled by producer Rich Harrison, to provide the main loops of the hit song "1 Thing" by Amerie. A re-engineered version of "Cissy Strut" was released by Butch Cassidy Sound System in 2005

At the 2005 New Orleans Jazz & Heritage Festival the original Meters reformed for a special performance. This went so well that the original group decided to play further dates in Las Vegas, Chicago, San Francisco and New York later in the year, including a benefit for Gulf Coast victims of Hurricane Katrina.

A Message From The Meters: The Complete Josie, Reprise & Warner Bros. Singles 1968-1977

Message From The Meters (CDS)

The Very Best Of The Meters

Best Of The Meters