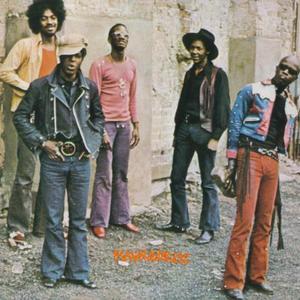 Funkadelic was originally the backing band for the doo wop group, The Parliaments. The band was added in 1964, primarily for tours, and consisted of Frankie Boyce, Richard Boyce and Langston Booth. They enlisted in the army in 1966, and George Clinton (the leader of Parliament) recruited Billy Bass Nelson and Eddie Hazel in 1967, then also adding Tawl Ross and Tiki Fulwood. Due to legal difficulties between Clinton and Revilot, The Parliaments' label...

Due to legal difficulties between Clinton and Revilot, The Parliaments' label, the name was abandoned in favor of Funkadelic, which consisted of the same group of people (that is, both the former Parliaments and their back-up band, now both combined in the name "Funkadelic"). The group signed to Westbound in 1968.

The group's self-titled debut album, Funkadelic, was released in 1970. The credits listed organist Mickey Atkins plus Clinton, Fulwood, Hazel, Nelson and Ross, though the actual recording also included several uncredited sessionmen then employed by Motown, as well as Ray Monette (of Rare Earth) and Bernie Worrell.

Bernie Worrell was officially credited starting with Funkadelic's second album, 1970's Free Your Mind... and Your Ass Will Follow, thus beginning a long collaboration between Worrell and Clinton (who had been friends for quite a while). Worrell would go on to produce many Parliament and Funkadelic albums, as well as play keyboard on albums by other members of P Funk.

After the release of Maggot Brain in 1971, Bootsy Collins and Catfish Collins joined the group. The brothers would go on to become major contributors to the P Funk sound. In 1972, this new line-up released America Eats Its Young, but many members left the group after that, due to internal squabbles, plus Hazel spending a year in jail for drug possession and assault and Tawl Ross experiencing a bad LSD trip and/or speed overdose, while Billy Bass quit due to financial concerns. Michael Hampton, a seventeen-year-old guitar prodigy, replaced Hazel.

1975 brought Funkadelic to Warner Brothers, and saw the release of Hardcore Jollies in 1976. The same year, Westbound released a compilation of archived tracks titled Tales of Kidd Funkadelic, which did significantly better than Hardcore Jollies and included "Undisco Kidd", a R&B Top 30 single. In 1977, Westbound capitalized on the success of Tales of Kidd Funkadelic by releasing The Best of the Early Years. Funkadelic recorded and released its magnum opus, One Nation Under a Groove in 1978. The title track spent six weeks at #1 on the R&B charts, while Parliament was enjoying success with "Flash Light" and "Aqua Boogie."

As the 1980s wore on, legal difficulties arising from the multiple names used by multiple groups, as well as a shakeup among Parliament's record label, Parliament and Funkadelic disintegrated. George Clinton recorded several solo albums (sometimes under the name GEORGE CLINTON & THE P-FUNK ALLSTARS).

Filmmaker Yvonne Smith of Berkeley, California-based Firelight Media produced Funkadelic: One Nation Under a Groove, a full-length documentary about the groundbreaking group, which aired on PBS in 2005.

By Way Of The Drum

Whole Funk & Nothing But The Funk CD2

Whole Funk & Nothing But The Funk CD1