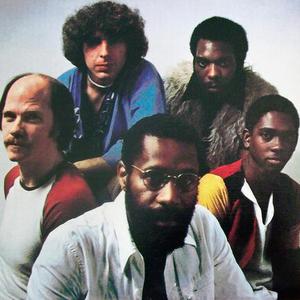 There are at least four bands w/ the name: 1 a USA jazz funk fusion band, 2. a side project of Swedish rock group Ultima Thule 3. a British post-punk group that released an album and two EPs in the early 1980s. 4. An Australian band from Sydney active 1980, 1984, 1988 - featuring prominent Australian and New Zealand musiciansTodd and Marc Hunter (hence the name) from Dragon and Kevin Borich. They released at least one album and single.

1. USA: Herbie Hancock originally assembled the band for his 1973 album Head Hunters. The Headhunters' new lineup & instrumentation, retaining only wind player Bennie Maupin, from the previous sextet, reflected his new musical direction. Bassist Paul Jackson was the only other member who maintained a continuous presence in the lineup, in subsequent recordings & concerts. On the originating album, the other band members were Bill Summers (percussion) & Harvey Mason (drums).

They continued to work with Hancock throughout the seventies, although the precise line-up varied from album to album. For the next Headhunters album, 1974's Thrust, Mike Clark took over drumming duties.

Both Mason and Clark contributed drums to the Hancock's 1975's solo album Man-Child, which featured guest appearances from Stevie Wonder on harmonica and Wayne Shorter on soprano sax in its greatly expanded line-up. (The release notes for Man-Child credit 18 musicians, in contrast to the simple quintet of their debut.)

1975 also saw Headhunters first album without Hancock, Survival of the Fittest, featuring the hit "God Made Me Funky". This song was sampled by The Fugees for their track "Ready or Not," and has been covered by Jamiroquai as a live track.

As the 1970s turned to the 1980s, Herbie Hancock drifted away from the band as he moved into his electro-oriented phase, and they ceased operation as a visible unit. The band reunited with Hancock for the 1998 album Return of the Headhunters.

Clark, Jackson and Summers have since continued recording and performing as The Headhunters, based in New Orleans, with Victor Atkins or Robert Walter filling in for Hancock on keyboards. They released an album, Evolution Revolution, for Basin Street Records in 2003, and backed up the saxophonist Rebecca Barry on her 2005 album Rebecca Barry and the Headhunters. In 2005 Hancock assembled a new group called Headhunters 2005. The group included guitarists John Mayer and Lionel Loueke, bassist Marcus Miller, drummer Terri Lynne Carrington, trumpeter Roy Hargrove and percussionist Munyungo Jackson.

British: the Headhunters appeared in the early 1980s on the Shout Records label, for which they released four singles and and an LP, "Industrial Warfare", before disappearing. The LP is in the mould of Killing Joke heading towards Chrome.

Give Us Some Heads

Return Of The Headhunters

Survival Of The Fittest (Remastered 2001)