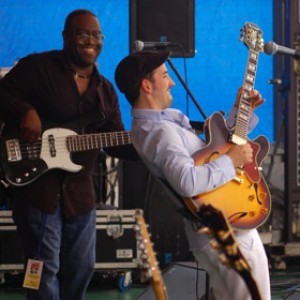 Marshak, a native of Long Island, grew up on rock ?n' roll music in a home full of musicians. Passing guitarists inspired his muse, and in high school he honed his chops with three well-respected teachers: Joseph ?Joey? Casciano, Mike Orioles and Richard Rabatin. They all inspired in him a lifelong commitment to his craft, while Rabatin in particular turned him on to the contemporary jazz and blues guitar sounds of Larry Carlton, George Benson and Robben Ford.

While attending college at SUNY Geneseo, Matt had the opportunity to play with a blues and R&B group, as well as connecting and improvising with straight-ahead jazz saxophonist Joseph Yoon. Once out of college, Marshak performed a variety of musical styles with New York's top original bands and artists, even drawing praise from Deep Purple's legendary guitarist Ritchie Blackmore.

In 2001, Marshak released the solo CD Preservation and began to get even more notice in New York, which led to the gracious plug by CD 101.9 in 2003. He opened for the popular Guitars & Saxes tour and in 2004 offered This Time Around, followed by Groovosphere in 2006 and On the Rocks in 2008, the latter earning praise from JazzTimes as ?one of the best smooth jazz CDs of the year, for sure.? On the Rocks also delivered a Top 30 nationwide smooth jazz hit with the cover song, which was also played extensively on Sirius Jazz Caf? radio station.

Although Marshak is busy with live shows and the recording studio, he also finds time to write TV jingles (his guitar was featured on the New York Mets' Mets Zone on Fox Sports) and conduct guitar clinics. But Marshak also enjoys giving back. He is a supporter of multiple sclerosis and autism awareness, and visits countless schools to help spread the joy of music to kids of all ages.??In the meantime, Marshak will continue to expose his funky, bluesy and smooth jazz music to the public through Family Funktion and his live shows. ?I'm really proud of this CD,? he says. ?It's my best yet. I can't wait to play the songs live.?